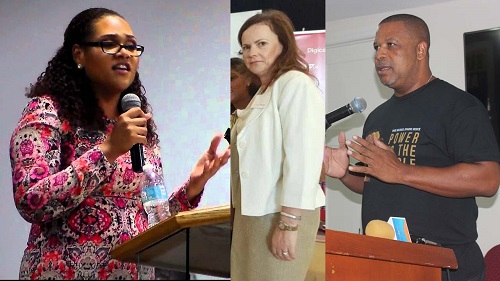 Providenciales, TCI, October 14, 2016 – A row over work permits and reports that the Immigration Board is about to put some companies on notice for not hiring Belongers for job positions when they can, has erupted.  Among them is Digicel, which is now the subject of some public scrutiny after a reported seven people, including six natives were let go this week from the telecommunications company following a company restructuring which led to a redundancy.

Magnetic Media is informed that the Labour Department is still working with the ex-employees of Digicel to ensure their severance compensation packages are fair.

It is not illegal to make staff redundant, TCI law makes provision for it and outlines what each staff is due based on time and tenure and employee contracts.  Digicel issued a media statement, but did not confirm how many staffers were made redundant.  What their statement did say, was why they laid off people and then shifted to Turks and Caicos Islanders who have been promoted within the organization.

Sinead O Marcaigh, CEO of Digicel said, “…we have been investing heavily in our networks and processes in the TCI over the past three years.  This investment sees us restructuring our business to keep putting our customers at the heart of everything we do, which in turn will mean better customer service, faster response time and integration of all products and services into a streamlined highly functional organization. The restructuring process has naturally resulted in a small number of roles being made redundant.”

Digicel says Denise Saunders of South Caicos and Louis Cesar, former weather caster in Provo are now both promoted to Directors within the company.  Saunders is now the Sales Director, while Cesar is the Propositions Director.

Still, former Premier Michael Misick and candidate for the next elections in a late night media statement said:  “The recent decision by Digicel to terminate the employment of a number of Turks and Caicos Islanders, while retaining the majority of their expat workers is an insult to Turks and Caicos Islands and its people. This is indeed a dark day as the efforts of TCI Governments to ensure that we have one of the most educated populations per capita, has been frowned on by a CEO who is ironically on work permit.”  Michael Misick is asking Digicel to give the islanders their jobs back.

It was said that head of the Immigration Board, also an at large candidate in the upcoming General Elections, Sheba Wilson has paid Digicel a visit and given the company a firm warning.   Some charge that it is a partisan or politically motivated move by Wilson.

No official release has been issued by the Ministry of Border Control & Labour.