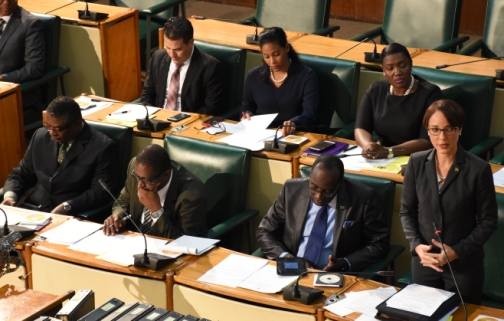 Kingston, Jamaica, October 10, 2016 – Jamaica has activated the Caribbean Community (CARICOM) disaster recovery assistance mechanism for Haiti and the Bahamas which were impacted by Hurricane Matthew.  This was announced by Foreign Affairs and Foreign Trade Minister, Senator the Hon. Kamina Johnson Smith, during Friday’s (October 7) sitting of the Senate at Gordon House.  Senator Johnson Smith said the engagement will entail teams of Jamaica Defence Force (JDF) soldiers being dispatched to both countries to assist with damage assessments, among other activities.

The JDF’s inputs are being coordinated by the Caribbean Disaster Emergency Management Agency (CDEMA), which was instrumental in formulating the CARICOM disaster recovery assistance mechanism.  Additionally, Senator Johnson Smith, who is Leader of Government Business in the Upper House, said the JDF’s grounds will be used to facilitate the landing and refueling of aircraft and other vessels from countries providing assistance to the affected territories.  These engagements are in keeping with Jamaica’s role in the CARICOM disaster recovery assistance regime, where it is the coordinating body with responsibility for Haiti, the Bahamas and Turks and Caicos Islands.

Meanwhile, Senator Johnson said the Office of Disaster Preparedness and Emergency Management (ODPEM) has activated the ‘Help Haiti’ bank account, which the agency manages on behalf of the Government of Jamaica.  She said the account, which has been established at the National Commercial Bank (NCB) in 2010, is now accepting cash deposits to assist with the provision of assistance to affected Haitians.

The Minister noted that while ODPEM was accepting provisions such as tarpaulins, bottled water and non-perishable foods, they were appealing for financial support,  “which they are able to channel into the purchase of what is needed as the needs lists are compiled.”  She said this would greatly assist in offsetting shipping, storage and delivery costs for relief provisions being sourced.   The account number, which has been posted on ODPEM’s website, is 21-2387304.

Senator Johnson Smith said that as part of the support being provided, arrangements are being made for Prime Minister, the Most Hon. Andrew Holness, to speak with Bahamas Prime Minister, Perry Christie, and President Raúl Castro of Cuba, which was also affected, to also determine the level of assistance that can be provided.  In expressing concern for the affected territories, Senator Johnson Smith said,  “we in Jamaica certainly give thanks for having been spared the devastating effects of Hurricane Matthew.”

In his remarks, Senate President, Hon. Tom Tavares-Finson, said several entities have made arrangements to facilitate the provision of assistance to the affected countries.  He noted that Jamaica was “very lucky” to have escaped the hurricane’s onslaught and underscored that,  “we should demonstrate our appreciation of that luck by our generosity towards the various agencies that are seeking to assist.”  The President also urged members of the Senate to participate to the best of their ability and to also encourage others to do the same.

For his part, Leader of Opposition Business in the Upper House, Senator Mark Golding, encouraged members to spare a thought for St. Vincent and the Grenadines, which was also affected, to see how best they too can be assisted.  He contended that the magnitude of Hurricane Matthew underscored the importance of disaster preparation, planning and management over the short, medium and long terms.  “We should ensure that we revisit our processes and all aspects of our disaster response mechanisms, so that we do not find ourselves wanting,”  Senator Golding added.