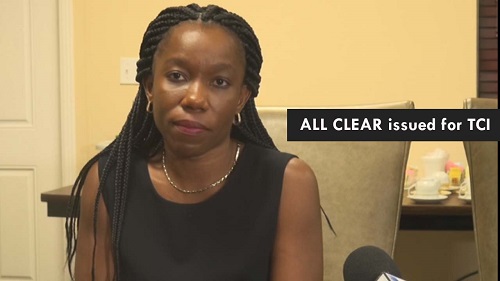 Providenciales, TCI, October 5, 2016 – Minutes to 4pm (Wednesday October 5, 2016) the ALL CLEAR was given for The Turks and Caicos and life as usual in these islands are officially resumed.
A Tropical Storm warning at 2pm today was discontinued for the Turks and Caicos Islands by the Bahamas Department of Meteorology.  Two hours earlier, at noon, the airports were reopened by the Turks and Caicos Islands Airports Authority.  That was approximately the time that tropical storm force winds were predicted to dissipate, and they did.
If you were looking for an epic encounter with dangerous, killer Hurricane Matthew then you are disappointed.  More sensible heads are grateful though for an uneventful encounter with the storm which has killed and destroyed and proven hard to chart, hard to read and uncommonly far reaching; nearly every country in the Atlantic & Caribbean had some brush with now Category three, Hurricane Matthew.   No damages were reported for the Turks and Caicos and the Department of Disaster Management and Emergencies kept its command center and storm shelters opened from Monday into today.
One thing we ought remember, is that although the tropical storm warning was discontinued for the TCI since 2pm, the DDME still has to do its checks to ensure that conditions are indeed safe, hence the all clear coming two hours later.
Currently, Hurricane Matthew is moving through The Bahamas chain of islands, expected to slam right into New Providence and Grand Bahama.  Those islands are as ready as can be and will experience Matthew by tonight.
Nearly all of Florida is under some kind of watch or warning and keeping to its peculiarity, Hurricane Matthew is, in at least two forecast models, expected to move up the south east coast, then make a turn or perhaps I should say a U-turn in the Atlantic and hit Miami.    If the storm does this, it will be much weaker forecasts are saying.
Again, Turks and Caicos is no longer under Tropical Storm Warning and the ALL CLEAR is issued by the Turks and Caicos Islands Government.