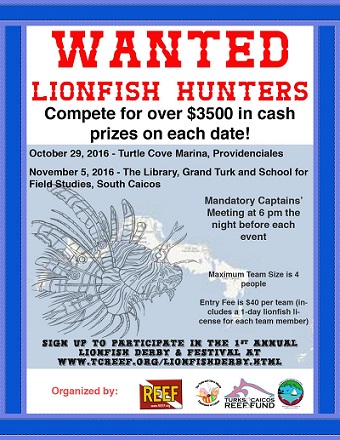 Provodenciales, TCI, September 14, 2016 – The Turks & Caicos Islands are to host its first annual Lion fish Festival. The Festival, hosted by the Ministry of Tourism, Environment, Heritage and Culture’s Department of Environment & Coastal Resources (DECR) and the Department of Culture, in conjunction with the Turks & Caicos Reef Fund, will be hosted on Providenciales and Grand Turk respectively and will include a REEF-sanctioned Lion fish Derby.

“Although it is a beautiful animal, lion fish are not supposed to be in the wider Caribbean region, but were introduced off the coast of the US and spread down through the Bahamas. Some TCI fishermen have been catching lion fish on a small scale for many years, and they know that although it’s invasive, lion fish is a very tasty fish. However, these fishers do not typically target lion fish heavily because crawfish, conch, and other fin fish are more profitable. So, we hope that the festival results in many lion fish being caught (and eaten) which will give our reefs a helping hand and also raise awareness about this invasive species. Above all we hope the events are fun and that many people from all walks of life come to take part. ” said DECR Director, Dr John Claydon.

Provo’s Lion fish Festival is slated for October 29th at Turtle Cove Marina and Grand Turk the following week on November 5th 2016, at the Library. Fishermen, water sports and dive operators are all encouraged to participate in the derby, which will kick off early in the morning. Family fun will follow with games for the kids, live music, watching of the scoring, free lion fish samples, filleting and dissection demonstrations, and a Q&A session about lion fish.

The Lion fish derbies will be a single day competition to collect and remove as many lion fish as possible. Teams will collect lion fish by spearing while free diving or snorkeling. Teams will begin competing at sunrise and will be required to bring their catch to the scoring station by 3:00 pm (South Caicos residents can participate in the Grand Turk Derby and the School for Field Studies will conduct scoring on South Caicos and report it to the organizers on Grand Turk. Each fish will then be measured, and cash prizes are awarded for teams catching the most, biggest, and smallest lion fish.

Not known to have any native predators, lion fish are greedy predators that prey on native fish and crustaceans in large quantities. Invasive predators, such as the lion fish, can pose a major threat to marine fisheries, habitats, and ecosystem function. The First Annual Lion fish Festival hopes to draw attention to the Atlantic Lion fish invasion and help promote development of the commercial Lion fish market.