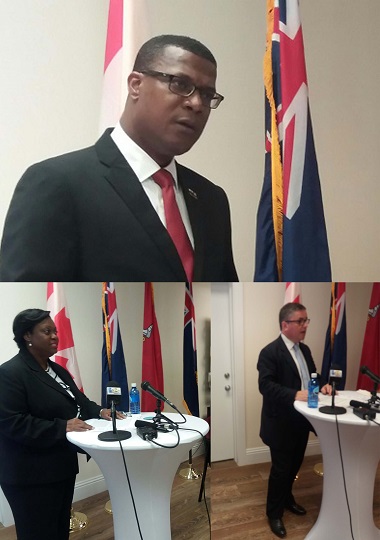 Providenciales, TCI, September 20, 2016 – Tough talk from the Premier today, who in essence said if he could do it now, he would send the UK appointed Chief Financial Officer packing.  Instead, the nation’s leader, Hon Dr Rufus Ewing, who stunned most in the room with his remarks said he will bring a motion to the House of Assembly to repeal the CFO.  Hon Ewing said Stephen Turnball, current CFO has overstayed his welcome, that he should have been gone six months ago, but the British have broken their promise, and to the Overseas Territories Attorneys General, he slammed the British for being anything but honorable.

“Dishonorable actions by the FCO, whom I now advise in turn to beware of the scrutiny and the spotlight of the world at large, should they continue to treat this nation in a dishonorable manner.” – Hon. Dr. Rufus Ewing

UK Solicitor General, Hon Robert Buckland the first British Minister to visit in the four years of the 2012 elected PNP Administration was chided for being the only one and sat grim faced as he listened to the scathing remarks and impassioned tone of Dr. Ewing.  The Premier said the UK has been high handed, over reaching, over bearing and under concerned about what the TCI public needs despite the TCI meeting its obligation to pay off the $170 million UK bail-out loan.

“Our right to manage our own affairs continue to be trampled upon by the UK government.  And despite our successes, her majesty’s government has willfully and dishonestly failed to uphold their end of this agreement.” – Hon. Dr. Rufus Ewing
Hon Dr Rufus Ewing was this morning speaking at the opening of the four-day UK Overseas Territories Attorney Generals Conference being held at Blue Haven Resort.