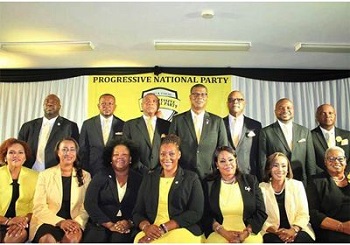 Providenciales, TCI,  August 1, 2016 – A weekend event for the governing Progressive National Party seemed to breath life into the political machine, which is now fuelled up and rearing to go as the first political party to reveal all  of its contenders for the upcoming General Elections.  While the date remains a mystery, with the Premier having as late as February 2017 to call the national voting day, the next run off will prove to be historic with likely the most candidates entering the political fray in the history of the TCI.

At Progress House on Saturday night, which is newly painted in a striking yellow, a press conference turned political rally, spanned nearly four hours as all fifteen standard bearers passionately expounded on their plans or continued plans and desires under a fourth time in, PNP regime.  We go first to Electoral District number 1, Grand Turk North where Minister George Lightbourne is incumbent,  “I have been called many things over the past four years, good and bad, but the name I hold true to is, FIGHTER.”

Onto Grand Turk South & Salt Cay, another Lightbourne, Arthur who the Premier believes can deliver for the first time, this seat to the PNP.   “I can promise you, I will fight with my party to make sure you get the opportunities that is available.”

Electoral District #3, one of seven women presented by the PNP on Saturday, current Government appointment member to the House of Assembly, Ruth Blackman was all smiles.  “This afternoon, it is quite evident from the turn out here this afternoon is that the PNP is alive and well, and on its way to victory, for a fourth consecutive term.”

Big islands, big representation is one of the many spiels of Mark Fulford, who debuted his theme song and main slogan, mark your mark for Mark.  “who ever they send, when ever they send, they gonna get a lickin’ out of this world.”

Onto Electoral District five, Leeward and Long Bay where Deputy Premier & Education Minister Akierra Missick will run again.  “I made four promises, three and a half to four years ago, I have accomplished those promises, and there is much more work for us to do.  And again that was only the foundation, Leeward and Long Bay.”

The Bight is the country’s bread basket and home to a slew of #1s touted current member for the district, Minister of Tourism, Porsha Smith.  “I said that I would partner for investment, I said that I would foster entrepreneurship and I said I would preserve our environment, and I am happy to report, that we were able to secure for The Bight community multi-recreational center, that I heard the other side talking about, and they would be able to talk about it because I shared it with them, they were on my team four years ago, we were able to secure 12.45 acres of land.”

Perhaps she can be labelled a quiet storm, another of the women in the front line of the PNP, Minister of Infrastructure and Housing Amanda Missick listed her accomplishments.  “When Glass Shack became my constituency Richmond Hill, the first time it was 2012, there roads were in such bad state.  Residents were taking buckets of koury and pouring it into the roads themselves, I promised them that I would get you roads.  Now you can drive on I-95”

Later today, we bring you the five at large candidates, comments from the National Chairman and Party Deputy Leader and the remaining three for the PNP in Providenciales.