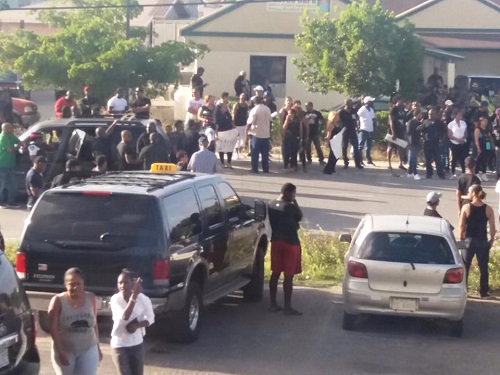 Providenciales, TCI, July 19, 2016 – People battling with angry emotions in the wake of a slew of unsolved murders in the country are being asked to get their anger in check, respect the laws of the land and to respect the law enforcers of the land.  Premier Rufus Ewing on Monday condemned the riot which broke out during what was touted to be a peaceful protest against crime and violence by the Dominican Community.  I quote the country’s leader now, “…we must all respect persons of authority at all levels, and especially our law enforcement officers.  Let me say that I absolutely condemn the event as this is not the Turks and Caicos that we know where police officers would come under attack for trying to enforce the laws of this country and leaving them no recourse but to use forceful tactics to restore peace and order.”

A Police Officer’s exchange with a Dominican man mushroomed in the volatile environment and led to police being kicked and stomped by the protesters; who outnumbered and attacked them when they tried to arrest the man, allegedly for purchasing a beer on the Sunday.  Tear gas was used to break up the melee.   The man was eventually arrested and released on police bail a few hours later.

The Premier is not the only one who took exception to rage against police; PDM Leader, Sharlene Robinson had similar sentiments but said the incident exposes the need for their concept of a multi-cultural department in Government.  “As we do that we require the leadership and the management of the many cultures that we don’t manage will clash.  The People’s Democratic Movement since 2012 on the campaign trail, and we can assure you that it will be a part of this blueprint, agreed that it was important to show leadership in a country that we call a melting pot, and we will bring to you, once elected, a multicultural department, that sets the boundaries for all nationalities living here and working among us.”

Former Chief Minister and PDA Party Leader Oswald Skippings denounced too, and added that better leadership will see the country under better control, “The recent incident in Providenciales involving Dominicans demonstrating which turned violent with a police officer being attacked, is totally unacceptable.  It is clear now that even the police have lost their authority to apply law and order in this country, a signal that should not go unnoticed or be taken lightly.”

The Premier has indicated that the attack on TCI Police, which eerily mirrors what has become a deadly situation in nearby USA, is not over.   Again I quote, Dr Rufus Ewing, “…stay tuned to further statements that will be made by the Government on these events as discussions continue to unfold with persons of authority.”

Related Items:police attacked by protesters in provo, protestors riot against police, riot breaks out on the streets of provo