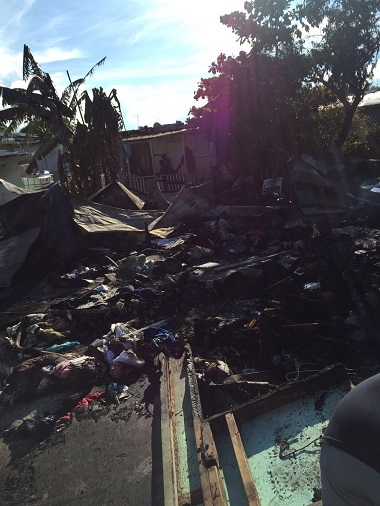 Providenciales, TCI, September 19, 2016 – Twenty people, five families were left with nothing but the clothes on their backs after a Friday night fire which ravaged five dwelling houses in Blue Hills.  Several meetings have happened and it has brought about impressive synergy of agencies including the TCI Red Cross, the Seventh Day Adventist church’s ADRA, Member of Parliament for Blue Hills, Goldray Ewing; Social Development and the Department of Disaster Management and Emergencies.

DDME was first focused on getting shelter for the group which includes two infants; it was hoped family could take the people in.  Soon, requests for clothing for men, women, children and babies were going out; asking also for grocery gift certificates and school supplies.

ADRA on Sunday afternoon donated $1000 which was split evenly between the five families and there were gift certificates coming from Graceway IGA, the Anglican Church and bedding from the Alexandra Resort.  Salvation Army informed that they could assist with mattresses and clothing; even the Turks and Caicos Hotel and Tourism Association dispatched notices for their members to help where possible.

You too can give, take your donations to the Department of Social Development.

Related Items:assistance coming in for families displaced by fire, organizations coming together to aid fire victims in TCI