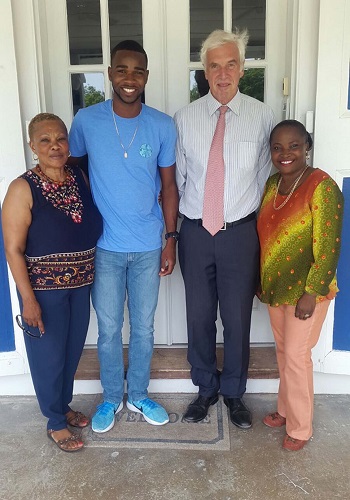 Providenciales, TCI, September 12, 2016 – His Excellency the Governor issued the following after meeting with Delano Williams, his mother, and Mrs Rita Gardiner BEM in Grand Turk on Tuesday, 6 September, on his return from the Rio Olympics.

“I was pleased Delano was able to find an hour in his busy post-Olympics schedule to come round to Waterloo on 6 September to talk about his experiences in Rio, and his plans. He confirmed my view that, while the disqualification had been a devastating experience for him and his team mates, he had picked himself up from it with enormous determination. Delano left me in no doubt of his aim to compete in the Olympics again in four years time in Japan, and we discussed some of the key events en route to that goal. I said that I hoped I might have the opportunity to see him competing live in the World Championships in London next year. We also discussed his participation in the Brisbane Commonwealth Games in 2018, which will be another important step on the way to the Olympics.

“We also exchanged ideas about sponsorship on top of the important contributions he receives from Flow and Nike, and I made a few suggestions for him to consider. I was delighted that Delano indicated his support again for Footsteps4Good across TCI later this month, and that he hoped to participate in one of the legs of it on Provo, which can support his Foundation.

“I am in no doubt that Delano is a fantastic role model for the young of Turks and Caicos, and a great international ambassador for the country.  He has picked himself up with extraordinary resilience from the disappointments of Rio, and I’m confident all of Turks and Caicos will be able to celebrate his victories as he pursues his aim of Olympic medals.” – HE Peter Beckingham