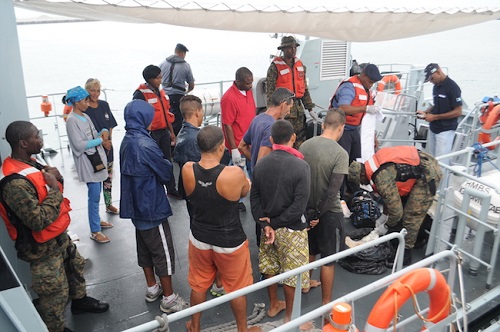 Coral Harbour Base (RBDF),  Bahamas, September 24, 2016 – Ten Cuban migrants are being detained after they were apprehended in the southern Bahamas by a Royal Bahamas Defence Force patrol craft on Friday evening.

While on routine patrol, HMBS L.L. Smith, under the command of Acting Lieutenant Commander Stephen Rolle, intercepted a sloop two nautical miles off Anguilla Cay at 6:50 pm.   Further search of the vessel discovered Cuban nationals: 7 males, 3 females, who were then taken aboard the Defence Force craft.  The Cuban nationals will be handed over to Bahamas Immigration authorities for further processing.