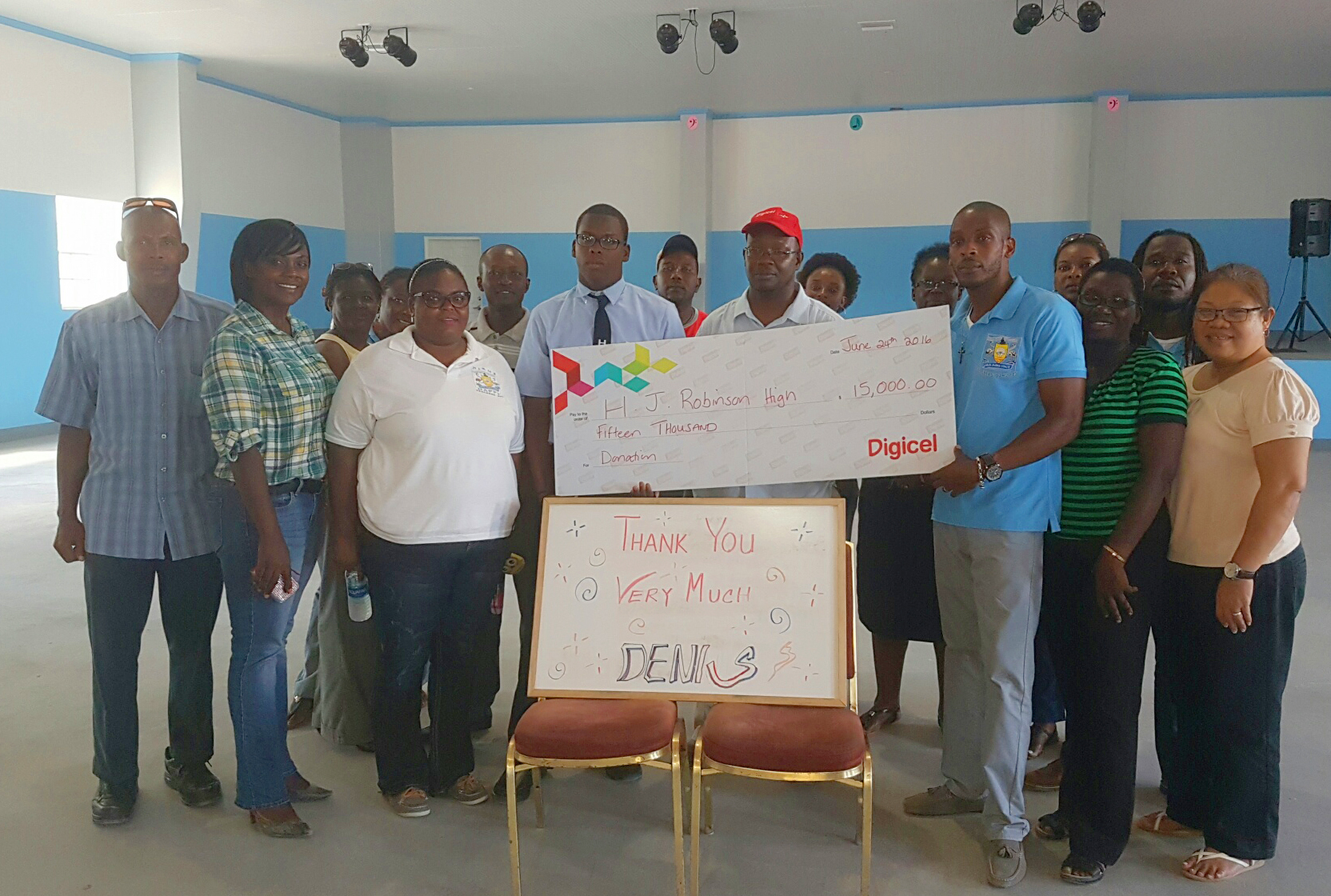 Thursday, June 29th – Providenciales – Almost $16,000 in materials and supplies has been donated by Digicel to the H.J. Robinson High School in order to assist with the school’s rebuilding efforts following a devastating fire at the start of the year. The donation was officially made on Friday 24th June at the school grounds.

The generous donation was the culmination of efforts initiated by several Digicel employees who are also H.J. Robinson High alumni. The employees were so distraught at the news of the fire that, while it was raging they immediately mobilised, requesting the company’s help in order to provide assistance for the school.

A “text to donate” campaign was launched on 29th January, the evening of the fire, allowing all Digicel customers to donate $1 by “HELP” to 5151.  Digicel’s Founder and Chairman, Denis O’Brien, was so moved by the employees’ compassion for their community that he personally contributed to the initiative. The school will receive a number of items like a wireless bell system, cameras, smart boards and PA speakers and lab equipment – as well as kitchen work tables and other items.

Roshaun Malcolm, Digicel Corporate Accounts Executive and H.J. Robinson High alumni, said: “As former students, the school has a really special place in our hearts and holds historical and educational significance for the TCI. The fire could have had a huge negative impact but, through the efforts of many in the community, especially our Chairman and our customers who have generously donated, and with Digicel’s help, we’ve turned a tragedy into a moment of triumph for community spirit.”

Digicel Marketing Communications Executive, Damian Wilson – also an alumnus – commented: “H.J. Robinson is a part of us, without it we could not have become the men and women that we are today. The rapid response by the community, in conjunction with Digicel, demonstrates that when we all work together, we can truly make a positive difference.”

H.J. Robinson’s principal, Reinwald Lewis, said: “We are excited and thankful for Digicel’s efforts to help us with our administrative block. After such a horrific fire, it is great to see that our alumni continue to value the contribution that the school has made to their lives and that they want to give back for the future of our children. Thank you to Digicel and Mr. O’ Brien for their generosity.”

Despite the challenges at the start of the new school year, the school has continued to dwell on the positives. “The teachers and students have been amazing,” Lewis said.  “We’ve really had to be innovative and find ways around the challenges. Resilience is an important thing. We’re in the process of rebuilding, and I want to keep the enthusiasm.”

Takara Bain (Head of Marketing), Roshaun Malcolm (Corporate Accounts Executive), and Denniser Forbes (Corporate Care Executive) were in Grand Turk to attend a cheque presentation to the students and faculty of H.J. Robinson High School, on behalf of Digicel Turks and Caicos.

Digicel Group is a total communications and entertainment provider with operations in 33 markets in the Caribbean, Central America and Asia Pacific. Digicel TCI is a majority owned TCI Company. After more than 15 years of operation, total investment to date stands at over US$5 billion worldwide. The company is renowned for delivering best value, best service and best network.

Digicel is the lead sponsor of Caribbean, Central American and Pacific sports teams, including the Special Olympics teams throughout these regions. Digicel sponsors the West Indies cricket team and is also the title sponsor of the Caribbean Premier League. In the Pacific, Digicel is the proud sponsor of grassroots NRL programs, women’s business initiatives and the Amicale soccer team in Vanuatu.

Digicel also runs a host of community-based initiatives across its markets and has set up Digicel Foundations in Haiti, Jamaica, Papua New Guinea and Trinidad and Tobago which focus on educational, cultural and social development programmes.