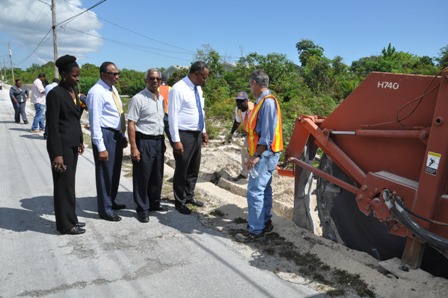 After 30 years of using fresh water wells operated by electric pumps, 102 families will soon be able to apply to Grand Bahama Utilities for potable water. The focal areas are Holmes Rock Avenue and Robinson Road, and Chisolm Avenue in the community of Holmes Rock.

“This is good news because water is essential to life, and although residents have electricity, water was lacking and now, that is a thing of the past,” noted Minister Darville.

He further said that the Government is making plans to announce the construction of a new school with state of the art sporting facilities in Holmes Rock, so putting water and electricity infrastructure in this planned area will be a catalyst for young people to establish permanent roots within this community.

Minister Darville noted the project is a joint effort between the Ministry for Grand Bahama, the Member of Parliament for West Grand Bahama, Grand Bahama Utilities, and Water and Sewerage.

The West Grand Bahama Potable Water project has three phases and is contracted to Waugh Construction.