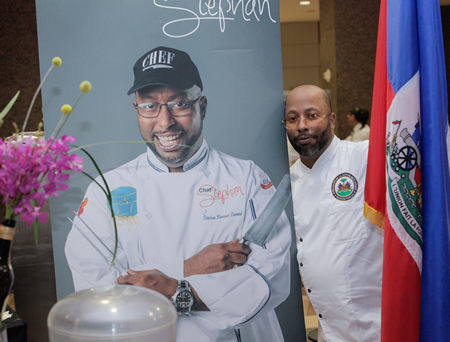 Washington, DC (HAITI), May 27, 2016 – The Embassy of Haiti and Haitian Chef Stephan Berrouet Durand brought Haiti’s gastronomy to Washington D.C. at the 8th annual Embassy Chef Challenge. The event was held at the Ronald Reagan Building and International Trade Center on May, 25, 2016. For only one night, 18 embassies gathered in one room using food as an instrument to bridge cultural differences.
Chef Stephan has been promoting the country’s culture through his culinary work and enjoys creating dishes that connect people to Haiti. In numerous occasions, he has been invited as a guest chef to represent Haiti with the Ministry of Tourism and at many Haitian Embassies abroad. He is known as a Culinary Ambassador for his home country. He transported attendees to the beautiful island using the one language we have in common, food.

Through the aromatic and succulent “Calalou Gumbo” with oxtail and crispy pork belly served with black mushroom rice, known as “Diri djondjon”, in Haitian Creole, a native dish of Haiti. The mushrooms give the rice its gray color and distinctive flavor.

Calalou Gumbo in Haiti is usually prepared with crab, shrimp, salted pork and cooked into the “djondjon” sauce with okra. Chef Stephan created a new version of the dish with oxtail and pork belly specifically for this Challenge. Using food as a culture identity, the ingredients revealed a lot about the country’s rich history and heritage.
The dish was paired with a special cocktail “Ti-Punch” which is Rhum Barbancourt, sugar cane syrup, lime juice, lime garnish. The “Ti Punch” ingredients created a road map pointing to significant elements in the Haitian cultural DNA.
On a regular basis the Embassy has highlighted Haiti’s rich culture sharing its multiple facets via art, music and gastronomy. Unfortunately, Haiti is often only associated with disaster and poverty. In the last four years, Ambassador Paul Altidor’s focus has been transitioning Haiti from a charity destination to a more sustainable investment, business destination.

To this end, he launched many initiatives during his tenure to encourage investment and consider Haiti as a social destination for vacations and other leisure activities. One of the best ways for Haiti to fight the negative representations is through its most powerful tool, culture.

The Haitian gastronomy has shaped it through culinary traditions. Haiti’s participation in the Embassy Chef Challenge created a visible impact that is easily grasped when promoting the country’s national brand. For a few hours Chef Stephan connected the attendees to Haiti, its people and history.

Source:  Embassy of the Republic of Haiti, Washington, DC