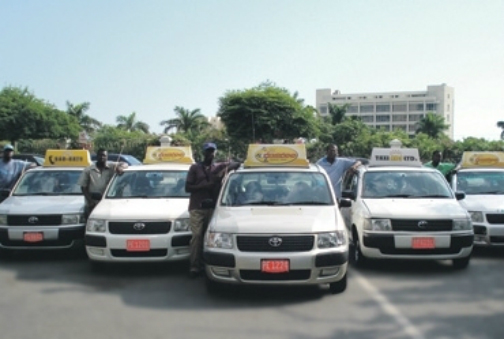 KINGSTON, Dec. 9 (JIS): As part of ongoing efforts to improve the public transportation system, the Transport Authority has introduced a system of colour coding of public passenger vehicles.

Under the new regime, which is being implemented in association with stakeholders, licensees and operators, all taxis are required to have a chequered strip running down the side of the vehicle as well as the globe at the top of the vehicle, clearly marked ‘taxi’.

“These standards are now part of our regulations. They have been gazetted and so by the end of March, which is the end of the re-licensing or reapplication period, all hackney carriage taxis as well as route taxis should be fitted with their colour-coded signs,” he said.

The Managing Director explained that in the case of route taxis, there is a black and white chequered strip running along each side of the vehicle from the front to the back. He said that vehicles operating as hackney carriages would have a black and yellow chequered strip. The strips, he noted, would be about four inches wide.

“It will help us to better monitor public transport. It will improve order and it will help commuters to easily identify legally operated taxis,” he said. Mr. Foster emphasised that no renewal of licence will be granted during the 2016 licensing period, which runs from February 15 to March 31, without the chequered colour-coded strip and the globe, along with the relevant vehicle examination.

“Come the 15th of February, when we begin our licence reapplication, the Transport Authority will not issue any licence to vehicles that are not properly colour-coded or vehicles that do not have all of the necessary requirements in place. Our priority is the safety and security of our commuters and all road users,” he said.
He added that no grace period will be allowed. “On the first of April 2016, if you have not renewed your licence, no extension will be granted. It must take place from February 15 to March 31and we have ensured that all the facilities will be in place to facilitate the process,” Mr. Foster said.