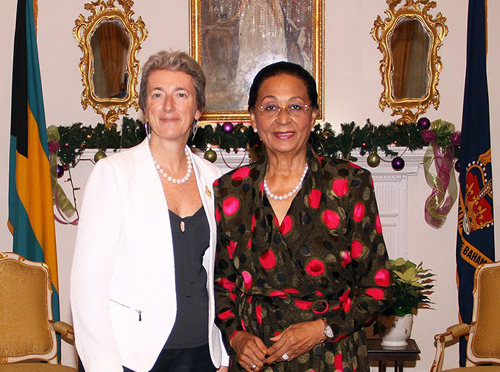 Nassau, 23 Dec 2015 – The European Union Ambassador to Jamaica, Belize, The Bahamas, Cayman Islands and the Turks and Caicos Islands – Her Excellency Paola Amadei – is moving on.

In the Turks and Caicos, Amadei was in country to join in this year’s ‘Footsteps 4 Good,’ which is the charity fundraiser started by Jill Beckingham, the Governor’s wife.

However, Ambassador Paola became known here when she brought $6 million dollars in funding in 2013 from the European Union for the hurricane ravaged victims of the TCI.

It was reported that some 124 families were assisted by the EU donation; after Hurricane Ike caused over 20 million in property damage.

Her Excellency Amadei presented her papers of credentials in Jamaica in 2012; she was also stationed in Jamaica.