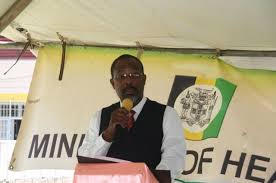 KINGSTON, Aug. 4 (JIS): The Ministry of Health is urging members of the public to take precautionary measures to prevent vector borne diseases by adopting several simple practices to reduce the mosquito population.

Due to the drought conditions being experienced across the island, the widespread use of water storage containers act as breeding sites that have the potential to increase the mosquito population.

“The prevalence of vector borne diseases has been on the rise, with estimates indicating that the number of cases of dengue, for example, has increased 30 fold over the last 50 years. This is of great concern because some of the diseases that now threaten the health of the region of the Americas, including Jamaica, are those which are transmitted in the same way as the Dengue virus,” he noted.

The Aedes aegypti mosquito, which is commonly found in every parish across the island, is the vector through which Dengue, Malaria, Chikungunya, and the Zika viruses are transmitted.

At a recent meeting with local government officials in Kingston, Dr. Ferguson said a national approach to vector management is needed to reduce the mosquito population.

“Control strategies focusing on source reduction are crucial. These involve the removal of larval/pupal habitat from the environment, or targeting the immature stages of the mosquito,” he said.

Dr. Ferguson outlined several measures to control and reduce the breeding of mosquitoes, such as preventing water from settling in shallow areas and in containers; and filling shallow depressions in the ground, where water may settle, with soil or sand.

Other measures include: regular cleaning of containers where water is stored to prevent mosquito larvae from maturing; and the proper disposal of containers. Persons are also encouraged to use Abate larvicide to prevent the breeding of mosquitoes.

The Ministry is urging persons to protect themselves against infection of vector borne viruses by using insect repellents containing DEET, mosquito nets and destroyers. Screens should also be installed on windows and doors.