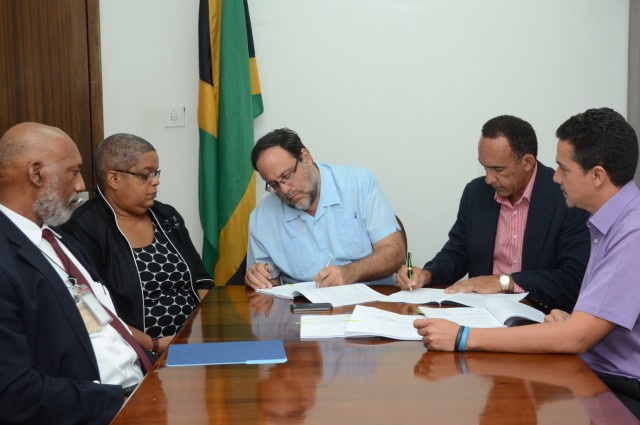 KINGSTON, Aug. 20 (JIS): A high density filing system is to be established at the Supreme Court’s Registry located in the new Public North building, downtown Kingston.

Minister of Justice, Senator the Hon. Mark Golding and Managing Director,
Keith Ryan & Company Limited, Richard Josephs, signed the $48 million contract for the procurement and implementation of the system, during a brief ceremony today (Aug. 20), at the Ministry’s Oxford Road offices.

In his remarks, Senator Golding said the filing system forms part of the reform programme for the justice sector.

He noted that a significant part of the Supreme Court’s activities depends on the Registry where documents are filed, kept and managed and made available to judges for matters that are before the court.

The high density system will ensure that all of the documents within the control of the court are properly filed.

“This is an important technological facility to support the activities of the Registry…a critical element in the efficiency of the business of the Supreme Court,” Senator Golding said.

It is expected that the high density filing system will be installed over the next eight weeks.

For his part, Mr. Josephs noted that his company is confident of delivering the system on schedule as required by the contract.

The high density filing system is mounted on movable carriages that glide on tracks, with mobilised shelving that converts wasted aisles into productive space.

It aims to maximize the available square footage for filing and to increase efficiency.
The system allows for reduction in time for retrieval and filing, enabling immediate improvement in productivity, while saving time and money on filing and re-filing. It also serves to increase storage capacity, thereby freeing up valuable floor space.