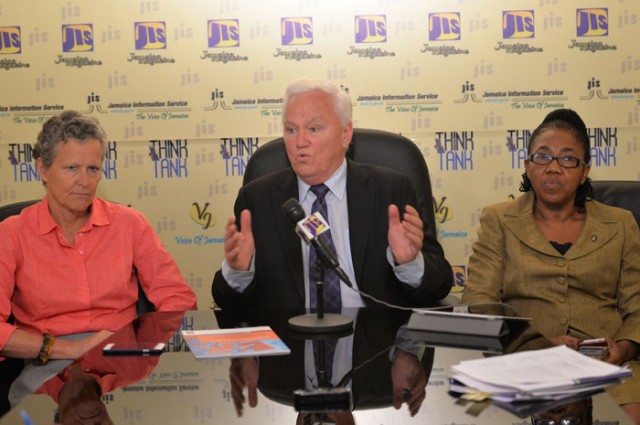 KINGSTON, July 22 (JIS): The Government of Jamaica is moving to change the model used for the privatisation of state-owned entities.

Deputy Financial Secretary with responsibility for Public Enterprises in the Ministry of Finance and Planning, Ann-Marie Rhoden, said the Ministry is looking at listing public entities that are suitable for privatisation on the Jamaica Stock Exchange (JSE).

Mrs. Rhoden, who was speaking at a JIS Think Tank on Tuesday (July 21), said that this method will replace the existing process of extending private invitations to investors to purchase entities or soliciting requests for proposals.

She said when this model is approved and implemented, it should result in a quicker turnaround time in privatisation of loss-making entities.

Mrs. Rhoden informed that the procedure was used successfully in the past for privatisation of the National Commercial Bank (NCB) and the Cement Company.

“We believe that the time is right for us to return to that model. There are entities that are ready for privatisation and if we were to develop the prospectus and get the entities out to market to the stage of listing, then we could complete a privatisation exercise in six months or so,” she pointed out.

Mrs. Rhoden was speaking within the context of recommendations made by a team from the Asian Development Bank (ADB), who are in Jamaica, to present their report: ‘Finding Balance 2014: Benchmarking the performance of State-Owned Enterprises (SOEs) in Island Countries.’

Jamaica, for the first time, participated in the study, which reviews the historical financial performance of SOEs in selected island economies, identifies the drivers of performance, and outlines successful reform strategies to inform future policy action.

Former Minister of State-Owned Enterprises in New Zealand, Hon. Richard Prebble, who is a part of the ADB team visiting Jamaica, said the listing of public enterprises on the stock market has been a successful model for the Government in New Zealand.

“The present New Zealand Government has listed some SOEs in New Zealand and that has turned out to be very successful. One of the reasons is once you list, the share price appears every day and that’s a great incentive for the directors to start to concentrate on what the business really should be doing, now…and that is a model that has worked,” Mr. Prebble noted.

In the meantime, Mrs. Rhoden said that this model will promote ownership of local enterprises by Jamaicans and result in more efficient management and delivery of service.

“So it wouldn’t be a matter of ‘selling-out’, because it’s our own Jamaican people on the stock exchange, who would own the asset; not a single or two persons, but the mass of Jamaica that would be owning and feeling good about themselves,” she noted.