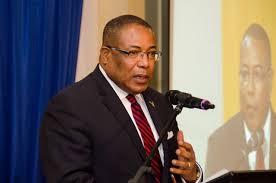 KINGSTON, July 6 (JIS): Minister of Industry, Investment and Commerce, Hon. Anthony Hylton, says the Government is implementing measures to facilitate the growth and prosperity of the creative industries.

The initiatives, he said, are in recognition of the creative industries as a generator of wealth for the mass of Jamaicans, and a driver of gross domestic product (GDP) growth.

“This is why it is linked to the growth agenda…and captured in a number of things…like the Vision 2030 plan, the national growth agenda, and it is the reason why the Creative and Cultural Industries Commission was created,” Minister Hylton noted, while addressing a recent JIS News Think Tank.

Among the measures being put in place to promote the creative industries, is the passage and enactment of the Security Interests in Personal Property (SIPP) Act.

The legislation provides for increased access to financing by micro, small and medium-sized enterprises (MSME), by allowing personal property (non-real estate assets) to be used as collateral for loans.

This means that owners of creative works, innovators and inventors, are now able to leverage their intellectual property (IP), such as copyright, patents and trademarks to be used as collateral.

He informed that the National Export-Import Bank of Jamaica (EXIM) has been mandated to work with the Government in order to increase loan access, with other institutions slated to follow suit.

“So, the banks need to get very creative and our traditional financial institutions should start soon to work with intellectual capital of various forms whether it be film, music, animation, art, drama,” he said.

Minister Hylton informed that talks have been held with the World Intellectual Property Organization (WIPO) for assistance “to work with the banks and to help them with IP evaluation…so that they can mitigate the risks around that kind of activity to drive sustained growth and build inclusion.”

As it relates to copyright, Minister Hylton told JIS News that the Ministry has accepted the Senate’s comments on the Copyright Act.

“The amendments to the Act are tremendous and will give this creative economy a significant lift and part of the deliberate strategy to build a framework to move away from real estate-based activity as a source of access to capital,” he noted.

The Bill, which was passed on June 9, 2015 in the House of Representatives, extends copyright protection from 50 to 95 years, for content belonging to corporations. Authors of literary works, dramatic, and musical creations will also enjoy the added protection.