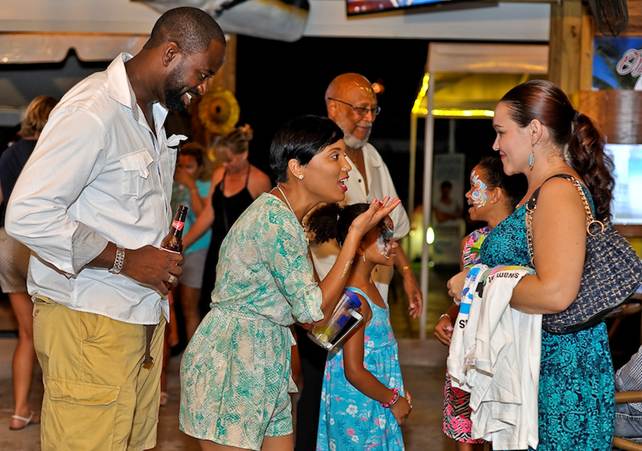 Save The Bays (STB) is calling its inaugural ‘Save Our Summer’ event a big success, with turnout exceeding expectations and much-needed funds raised to support the fast-growing environmental group’s diverse range of programs and initiatives.

CEO Vanessa Haley-Benjamin said more than 100 attendees learned about STB’s efforts to protect the environment from threats such as oil pollution and unregulated development, through a unique approach that combines public advocacy, education and – when necessary – court action.

“We raised awareness about the environment, forged new relationships, and saw a considerable boost in the number of signatures on our petition calling for an Environmental Protection Act and a Freedom of Information Act. All in all, the day was a big success,” Haley-Benjamin said.

None of it would have been possible without the help of STB partners such as Sands Beer and John Watlings Distillery, she said, reserving special thanks to the Green Parrot Bar and Grill, which hosted the event.

“Green Parrot provided us with the platform to share what we have been doing and what we have planned,” she said. “STB considers such partnerships invaluable and looks to forge even more with the wider community to build awareness.”

The fun-filled event had something for everyone, with the face-painting booth proving a particular hit among the children. Haley-Benjamin said family engagement was a priority, as a key focus of Save The Bays is engaging the next generation of Bahamians in the effort to preserve the environment.

Attendees both young and old rocked to the live entertainment provided by Green Parrot favorites the Long Island Connection, as well as Bahamian superstar and STB director Kirkland “KB” Bodie.

STB education director Joseph Darville said the funds raised will support ongoing programs such as the Youth Environmental Ambassadors, a conservation and leadership program for students. Another beneficiary will be Waterkeepers Bahamas, a groundbreaking effort to monitor water quality and safety around the country, in collaboration with the global Waterkeeper Alliance.

“More than 200 Waterkeepers are working daily to ensure that there are swimmable, drinkable, fishable waterways worldwide. Thanks to STB, The Bahamas is now part of that network, but this effort will require continued funding going forward,” Darville said.

Some of the funding will also go towards new initiatives, in particular an Oil Pollution Prevention Campaign that STB expects to launch in the coming months, according to STB’s CEO.

“Few challenges to our natural resources, and therefore our way of life, are as grave as the threat posed by oil pollution. Existing spills have already caused untold damage to marine ecosystems and groundwater reserves,” Haley-Benjamin said.

“With the prospect of offshore oil exploration now looming large, our organization feels Bahamians must do all they can to ensure that the proper safeguards, regulations and remediation protocols are in place.”

She added that the event was just the first in a series of awareness raising efforts, the next being a beach cleanup in partnership with RBC, Bahamas Waste and Stuart Cove’s Dive Bahamas.

“Corporate and community partnerships are the way forward for environmental organizations such as STB, which is seeking to engage the entire nation in the effort to preserve our natural heritage for the benefit of future generations,” Haley-Benjamin said.

“While collaboration can be a mechanism to raise funds, even more importantly, new relationships can increase access to knowledge resources and improve the effectiveness and relevance of our programs.”

“That is why we encourage all Bahamians who are concerned about protecting the environment to get involved. Follow us on Facebook, sign our petition and volunteer or become an official partner of Save The Bays.”

Education advancements the focus of TCI Deputy Premier at Caribbean 2030