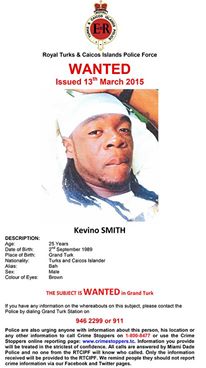 Providenciales, 17 Mar 2015 – A missing man is also a wanted man; 25 year old Kevino Smith has been out of touch with family since early this month. A PTV report reveals that Smith has not been in touch with his relatives since March 4th… and that Police have been looking to interview him since March 4th. A search for Smith on the weekend involved a horseback hunt, marine division and even off of the island of Grand Turk, where he was last seen. It is said the search will continue and broaden to include all of TCI, even with the use of aircraft. Kevino Smith was last seen wearing a black short sleeved shirt, long black Dickies pants and sports a braided hair style and is about 6ft tall and of medium build. Police are not revealing why they want to speak to Smith.