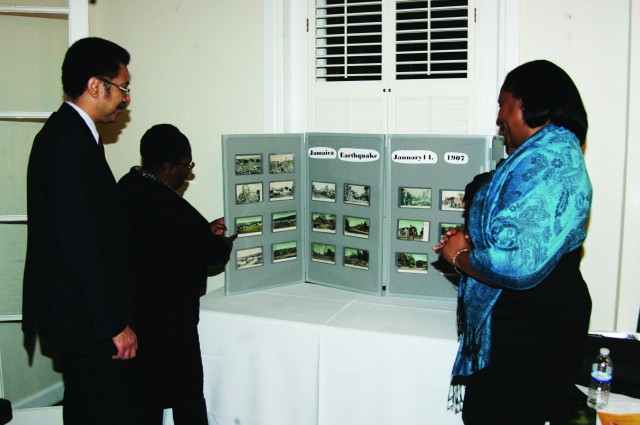 WASHINGTON, D.C., Dec. 7 (JIS): A collection of over 200 postcards, depicting Jamaica’s rich history, is currently on display at an exhibition being hosted by the Embassy of Jamaica in Washington, D.C.

The exhibition, titled: ‘Greetings from Jamaica, a Country of History in Postcards’, displays the compiled collection of Jamaican Speech Pathologist, Marva Shand McIntosh, who resides in the United States capital.
It was formally opened on December 3 by Jamaica’s Ambassador to the USA, His Excellency Stephen Vasciannie.
The displays include the first locally produced postcard, titled ‘Jamaica 1877 Paid’, dating back to the year 1877.
That initial production coincided with Jamaica’s admission to the membership of the International Postal Union (IPU), which facilitated locals with the opportunity to mail postcards overseas, unlike the previous arrangement which restricted them to intra-island postage.

The exhibits also include several series capturing the January 1907 earthquake that rocked Jamaica; as well as the advent the island’s tourism industry during the early 20th century.

Ms. McIntosh advised that most of the postcards being exhibited were mailed from Jamaica to Europe and North America.

She said postcards were initially used in Jamaica for business purposes during the early years period they emerged, as well as friendly correspondence during World War II.
She pointed out that postcards leaving the island during the war, between the 1930s and 1940s, were given special markings, which can still be seen on a number of the exhibits currently on display.