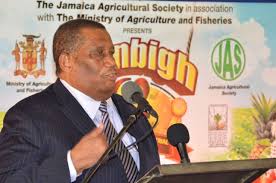 KINGSTON, Sept. 10 (JIS);
The brightly shining sun belied the somber mood, which hung over the Norman Manley International Airport in Kingston today (September 10) as the body of the much beloved late Minister of Agriculture and Fisheries, Hon. Roger Clarke, arrived in the island.

There was hardly a dry eye among the throng of Cabinet Ministers, Government officials, and family members in attendance, as the casket, draped in the Jamaican flag, was carried by members of the Jamaica Constabulary Force (JCF) past the honour guard created by the mourners, from the airplane to the hearse on the tarmac.
Mr. Clarke died on August 28, 2014 while returning to the island from the United States, where he had gone for back surgery.

The Government Ministers, led by Prime Minister, the Most Hon. Portia Simpson Miller, raised their voices in unison as they belted out renditions of various hymns including “Great is thy faithfulness”, “How great thou art”, “I will go without a murmur”, “God will take care of you”, “Precious Lord lead me home”, while they awaited the arrival of Mr. Clarke’s body in the departure lounge.

The singing resumed as the casket was placed in the hearse. Minister of Education, Hon. Rev. Ronald Thwaites offered prayers, after which the Lord’s prayer was recited.

Former Prime Minister, the Most Hon. P.J. Patterson, who was in attendance, said it was a “very sad occasion.”
Speaking with JIS News, Mr. Clarke’s driver of 10 years, Easton Stewart expressed sadness that “my boss gone leave me”.

“He was a good man to me and he always stood by my side. I loved him. I took him all over Jamaica,” he said, adding that he will just have to be strong with God.

Mr. Clarke has been accorded an official funeral, which will be held on Saturday, September 13, at the St. George’s Anglican Church, Savanna-la-Mar, in Westmoreland. Interment will follow at a family plot in Glen Islay in Williamsfield.

Mr. Clarke’s body has been transported to Manchester, where it will be housed at Lyn’s funeral home until tomorrow (September 11) when it will be available for public viewing across the island until Friday (September 12).

A wake will also be held on September 12, at Independence Park, in Savanna-la-Mar.

Government Continues To Create Environment For Technology And Innovation