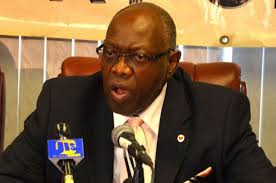 KINGSTON, Sept. 17 (Jamaican Information Service): Minister of Health, Hon. Dr. Fenton Ferguson, is calling on all Jamaicans to come together and designate a day to undertake community clean-up activities.

He pointed out that the Aedes Aegypti mosquito, which transmit the Chikungunya virus, breeds in and around areas where people gather, so the school, home, church and business places should be a part of this clean-up.

“I urge Parliamentarians to lead their constituents in this drive,” Dr. Ferguson said.
Speaking in the House of Representatives, today (September 17), the Minister also called on Members of Parliament (MPs) to engage in constructive discussion about the Chikungunya virus.

“I must caution persons to be careful with the discourse, as the misinformation being spread in some quarters is not in the best interest of the public and can only be detrimental to efforts to secure public health,” Dr. Ferguson said.

He informed that as of September 16, there was seven affected parishes with the disease, as the Caribbean Public Health Agency has confirmed one case from St. Mary and three from Portland. The other parishes are Kingston, St. Andrew, St. Catherine, St. Ann and St. Thomas.

The Minister noted that up to the week ending September 13, there were 524 notifications of which 251 were classified as suspected cases. He added that as of September 16, 31 cases were laboratory confirmed, with 26 being discharged due to negative results and 194 cases remain suspected.

So far, Kingston and St. Andrew and St. Thomas seem to be the areas with the most cases, he added. Dr. Ferguson informed that he has visited Nutts River in Eastern St. Thomas as well as the Yallahs Primary School, where it was reported that a number of students and teachers were displaying flu like symptoms.
“I expressed my sympathies and assured the leadership of the school that we will continue to work closely with them through the St. Thomas Health Department, which has visited the institution four times since August 25,” the Minister said.