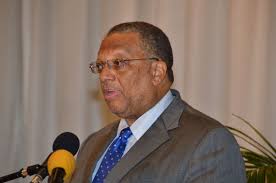 WASHINGTON, D.C., Sept. 3 (JIS): Three loans totalling US$105 million were signed by the Government and the World Bank, at its headquarters in Washington, D.C., today (September 3).
Minister of Finance and Planning, Dr. the Hon. Peter Phillips, signed on behalf of Jamaica, while World Bank Country Director for the country, Sophia Sirtaine, signed for the bank.
The loans are in support of three government projects – the Foundation for Competitiveness and Growth, which will receive US$50 million; the Youth Employment in Digital Animation Industry, US$20 million, and the Strategic Public Sector Transformation Project, US$35 million.
“The projects are intended to further the overarching goals of the Government of Jamaica-World Bank Country Strategy for the period 2014 – 2017; to support the government’s investments in key strategic areas, including physical sustainability in youth employment; public sector modernization and to facilitate a more enabling environment for private sector growth,” the Finance Minister said at the signing.
Dr. Phillips added that the loans represent an important cooperation between the Government of Jamaica and the World Bank, and is aimed at advancing the prospects for growth as the country goes through a strenuous economic reform programme that forms part of the agreement with the IMF.
He said the Government will do its utmost best to ensure a smooth implementation of the three projects.
The Minister explained that funds for the Foundation for Competitiveness and Growth project will enhance competition in the business environment, facilitate strategic private investments and support Small and Medium Enterprises (SMEs).
Funds for the Youth Employment in Digital Animation Industry will provide training and coaching for over 200 young Jamaicans, enhance entrepreneurial skills and create 150 start-up companies.
Under the Strategic Public Sector Transformation Project, the funds will be used to strengthen public investment management systems, budget preparation process and property tax compliance administration.
In her remarks, Ms. Sirtaine had high praise for Jamaica regarding the programmes it has implemented to spur economic growth, and for the results it has been reaping since its implementation.
She added that the bank is committed to working with Jamaica in ensuring the success of its various economic programmes.
Dr. Phillips and his delegation are also engaged in a series of discussions with officials at the US Treasury, State Department, the IMF and the Inter-American Development Bank (IDB).
He is accompanied by the Governor of the Bank of Jamaica, Brian Wynter; Director General of the Planning Institute of Jamaica (PIOJ), Colin Bullock; Financial Secretary, Devon Rowe and Ambassador to the United States, His Excellency Stephen Vasciannie.