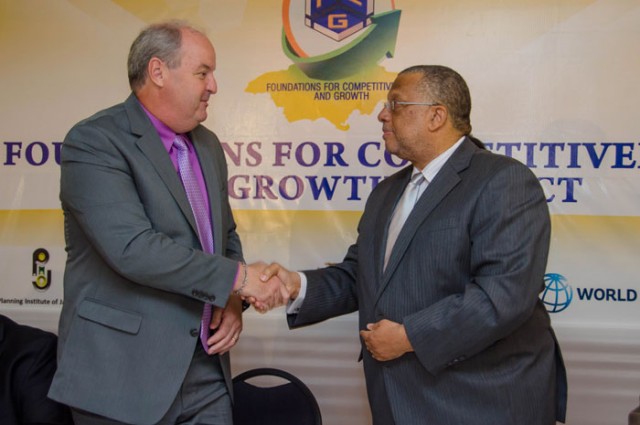 KINGSTON, Sept. 24 (Jamaica Information Service): Government has signed a US$50 million Memorandum of Understanding (MoU) with the World Bank, to strengthen the business environment in Jamaica to enable further private sector investment.

The loan agreement was signed by Minister of Finance and Planning, Dr. the Hon. Peter Phillips and Senior Private Sector Development Specialist with the World Bank, Thomas Vis, during the launch of the programme at the Mona Visitors’ Lodge on September 24.

The initiative, which has been dubbed the Foundations for Competitiveness and Growth project, will be implemented by the Planning Institute of Jamaica (PIOJ) over a six-year period from August 2014 to June 2020.
Dr. Phillips said the project will enhance competition in the business environment, facilitate strategic private investments and support Small and Medium Enterprises (SMEs).

The Minister informed that the project will also provide resources for private businesses to undertake pre-feasibility studies in relation to strategic investment projects that are to be implemented.
“It will also facilitate the development of technical studies for critical sectors that the country may choose to emphasise as part of its growth strategy,” he said.

Dr. Phillips noted that in this vein there is a need to explore much further, the global dynamics of the Business Process Outsourcing (BPO) industry, pointing out that this is an area where Jamaica can make a significant mark. “This is an area where we can put tens of thousands of Jamaicans to work,” he argued.

For his part, Mr. Thomas said the project represents an element in a larger partnership between the Government of Jamaica and the World Bank, and is aimed at advancing the prospects for growth, as the country goes through a strenuous economic reform programme that forms part of the agreement with the IMF.

Meanwhile, Permanent Secretary in the Ministry of Industry, Investment and Commerce, Vivian Brown, said a part of the Government’s role, as it strives for greater economic growth and job creation, is to facilitate and enable private investment, both domestic and overseas, in the Jamaican economy.

“It is our belief that this project will support that strategy,” the Permanent Secretary added.
Director General of the PIOJ, Colin Bullock, said under the project, new and existing businesses will benefit from streamlined regulations and processes, opportunities for public-private partnerships as well as training and access to financing.

“It is a timely initiative, as there are investment opportunities available to the private sector, which can be facilitated by enhancement of the business environment,” he noted.
Mr. Bullock said the project seamlessly aligns with the Government’s growth agenda and directly supports the achievement of goal three of the National Development Plan, Vision 2030, which is to make “Jamaica’s economy prosperous.”

Chief Executive Officer, Private Sector Organization of Jamaica, Dennis Chung, said the private sector strongly welcomes the initiative, noting that “it will finally allow us to tackle critical areas affecting our ability to be competitive and grow the economy.”
He emphasised that sustainable economic growth is only possible with the growth of the SME sector, where new innovations tend to be created.