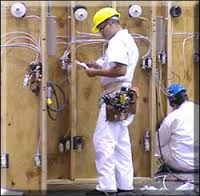 Electricians and electrical contractors on the islands of Grand Turk and Providenciales are asked to attend two important meetings hosted by The Energy & Utilities Commissioner and the Electrical Inspectorate Unit in the TCIG Department of Planning, relating to proposed mandatory licensing.

The meetings are called as government works toward the resumption of the Electrician Certification and Licensing Programme, which will make it mandatory for individuals who perform electrical works within the TCI to be licensed in order to operate.

Meetings will be held on Grand Turk on Thursday 26th September starting at 2:00pm at the Anglican Dillon Hall; and on Providenciales on Wednesday 2nd October, at the Department of Environment and Maritime Affairs Conference Room, the Byte, starting at 10:30 am.

Meetings planned for the other islands will be announced soon.