PROVIDENCIALES,TURKS AND Caicos, September 16, 2013- In a finely tailored suit… a quick look back and a whisp of a wave goodbye… Damian Roderic Todd was gone…disappeared into the darkness and boarding the British Airways flight on the Provo International Airport runway bound for Heathrow… first the national anthem, then auld lang syne played by a capable contingent from the Royal Turks and Caicos Police Force Band. Media was there and so were other uniformed officers… and the Deputy Governor who said yes, the outgoing Governor is special, but work continues. 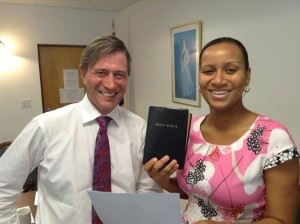