the clock tower site in Grand Turk, the capital of the TCI, which is a British overseas territory; one shot for each year of life with which Queen Elizabeth was blessed, 70 of those years delivered to the United Kingdom and the Commonwealth where she served as Head of State and Monarch in unprecedented fashion.

Many did not expect the queen to persevere too much longer after her beloved Prince Phillip died in April 2021, but on she trudged, through the omicron wave, the early summer heat wave and lingering long enough to mark her Platinum Jubilee and to give her final installment of new UK prime minister; Queen Elizabeth completed her journey in fine form.

Still her death, yesterday September 8 has plunged her world of admirers into deep mourning and thrust her eldest 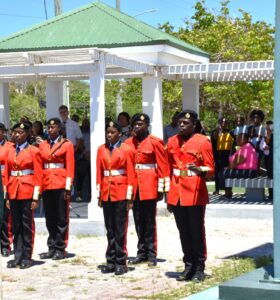 of sons to the head of Great Britain as the new King Charles III.

Looking on at the salute in memory of the Queen were the Crown’s officials led by Governor His Excellency Nigel Dakin and Deputy Governor Her Excellency Anya Williams.

It took place at noon with members of the public gathered, uniformed branches supporting and the 96-gun salute solemnly carried out by members of the Royal Turks and Caicos Islands Police. 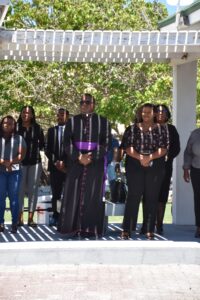