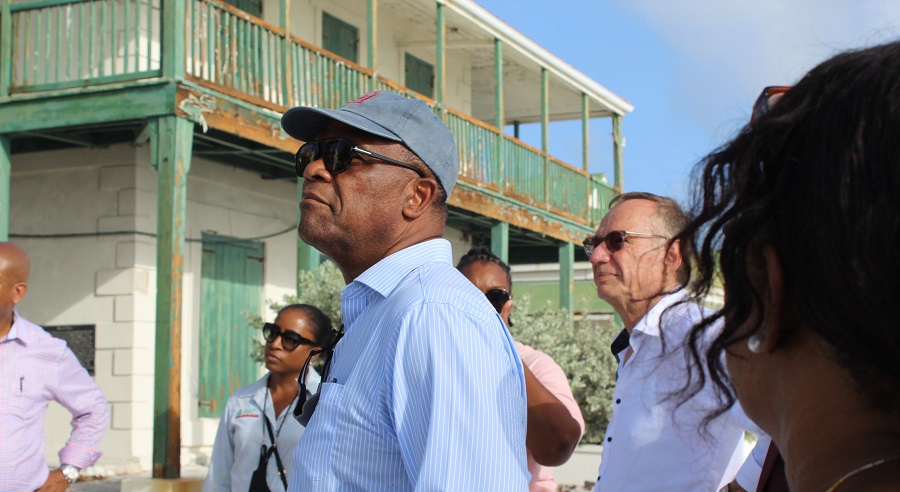 #TurksandCaicos, June 19, 2021 – Four months from now Grand Turk could be welcoming the biggest names and brands and vessels in cruising, and when the passengers descend upon the island it will be overwhelming in terms of the numbers.  What the Turks and Caicos Islands Government hopes and Carnival Cruise Line executives want, is for the experience to be greatly enhanced and far from under-whelming, whenever that day comes.

An $8.5 million Turks and Caicos Islands Government and Carnival Infrastructure Fund will support refurbishment and development to ensure the visitor experience is unforgettable for all of the right reasons.  Enhancements in Grand Turk, despite the sizeable cash storage, have been slow, however both parties, on Thursday, re-committed to spending from the fund.

“We have toured the island, we have spoken about how the infrastructure Fund will manage, because of that conversation, I expect that you will see a more orderly and more timely draw down of the funds that will be re-invested.  The focus will have to be on the physical, the cultural and the cultural heritage of these islands.  This is a fragile environment; we are looking at expanding the tourism product both land-based and cruise-based.  The Government will be making significant investment alone or along with Carnival to do everything that we can to preserve the culture and the architecture,” said Hon. Washington Misick, TCI Premier in addressing questions posed at a public meeting held on June 17.

The high level meeting was held at the Grand Turk Cruise Center around 3 p.m. on June 17, 2021; it was followed by a two-hour walking tour of the capital and on Friday, a meeting was planned with Carnival staff on the island.

“One of the big things we are looking at is how we can provide incentive to encourage investment in the historic district, but also, particularly so in our traditional communities.  I am here today to reinforce our relationship and our partnership with Carnival to ensure that once they return we can operate in partnership, in an orderly basis so that everyone who has an interest in the cruise sector can benefit,” said Hon Misick at the meeting.

Areas viewed were South Base; a government zone badly destroyed when hurricanes Irma and Maria battered Grand Turk within a week of each other in September 2017.  The delegation, in golf carts, moved along the historic lanes of Duke and Front Streets with stops at Osprey Beach, which led them pass deserted businesses, the unoccupied Welcome Center and the dilapidated buildings, all flanking Columbus Landfall National Park.  There was also a walk through Middle Street.

“We are committed to making this the best visitor experience, but also the best experience for those of us who live and work here by redeveloping and repositioning our tourism product to be the best that it could be in any small island.  Carnival has demonstrated their commitment during the talks to helping us achieve that.”

The quaint, historic island is the capital of the Turks and Caicos and at less than seven square miles, with a population around 4,800 people (probably less with the loss of the cruise industry), it is predicted cruise calls will bring with them more than double the residency.

“Twenty-three per cent of guests book tours on the ship.  That means all of the other guests are available to go on tours or to do whatever activity they may chose, so I believe there is enough business for everyone,” said the Premier.

Everyone, could possibly include a new cruise line and definitely includes expansion of the current gangway at the Grand Turk Cruise Center.

“The overall project of expanding the pier so that we can take the Mardi Gras; that project only is about $25 million. We are ready to commence work. We have worked with Government on some of the permitting, some have already been granted and we are working on the details, explained Giora Israel, Senior Vice President of Global Ports, Carnival Corporation who added: “…that will allow the Mardi Gras come in with two gangways which means we can have people get off the ship very, very quickly.  This activity is very important to make sure we can take the ship. There are not many ports that can take this ship, we are delighted to advise you that the Mardi Gras, and its sister ship, Celebration – in about a year and a half from now – they are scheduled to come here.”

The two vessels named by Mr. Isael boast many firsts including being the only LNG (Liquefied Natural Gas) powered cruise ships in the Americas and in the case of the Mardi Gras, which arrived at its home port in Port Canaveral, Florida on June 4, 2021 it features the first rollercoaster at sea.

No date was announced about when the cruise industry will reboot for Turks and Caicos and when Carnival Cruise ships will return to the Grand Turk Cruise Center, however, the new PNP Government Administration through the premier assured it is committed to reversing the economic contraction which forced a pause on cruising since March 13, 2020.

TCI: Town Meeting held in Grand Turk as Cruising set for re-boot by end of Summer