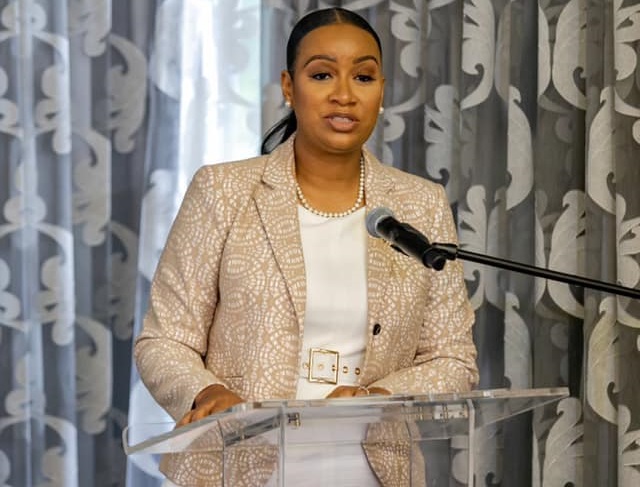 #TurksandCaicos, June 2, 2021 – A canopy for shelter, a new clearance procedure and additional staff are among the plans to help manage arriving passengers at the Providenciales International Airport; the long standing issue of congestion at the airport is back, as life returns to normal and that pent up demand for Turks and Caicos vacations is manifest.

H.E. Anya Williams, Turks and Caicos Islands Deputy Governor, in response to our queries confirmed there were a crush of issues on Saturday which led to passengers having to queue on the tarmac for long periods of time, not least of which is that six immigration officers scheduled to work did not show up.

“Some have provided medical certificates to support their absence while others are still being investigated. To minimize the impact of their absence, off duty officers on the island of Providenciales were called in, in addition to officers having been brought over from Grand Turk to assist,” said HE Williams, who heads the Public Sector of TCI Government.

While there is no official information on why those officers were out, a back-up plan is being hatched.

“I can confirm as well that 6 Immigration Officers scheduled to work on Saturday did not report for duty.  Some have provided medical certificates to support their absence while others are still being investigated.

To minimize the impact of their absence, off duty officers on the island of Providenciales was called in, in addition to officers having been brought over from Grand Turk to assist.”

Astounding, she said is the overwhelming arrivals for Saturday.  The Transportation Security Administration (TSA) reported 7.1 million travelled over the week, with 1.6 million passengers through US airports on Saturday alone.

“I can confirm that on Saturday May 29, 2021 we experienced significant congestion issues at the arrivals section of the Providenciales Airport which resulted in persons having to queue on the tarmac for an unfortunate period.

This was due to a number of factors including heavy flight loads as well as scheduling and other issues, including staff absences during the early part of the day.

A total of 2,397 passengers arrived at the Providenciales Airport on Saturday May 29; quite a significant increase compared to previous months.

7 international flights arrived between 12 to 1pm, some within 10 mins of each other, preventing officers from being able to clear one flight before the next or a subsequent thereafter landed, resulting in long queues.”

Mr. Floyd Ingham, Acting CEO of the TCI Airports Authority confirmed on Saturday that flights had reported they would be 75-80 per cent full.

“The Turks and Caicos is currently experiencing a significant increase in our tourism arrivals,” said Mrs. Williams, who continued in her statement with: “We are working our best to develop a strategy for the construction of a new terminal as we recognize that our current demand has outgrown the current space at the airport, which has proven to be even more challenging at a time when we are trying to enforce social distancing, health screening and other requirements.”

In the interim; a canopy is coming and cross training of Immigration officers to support the TCI Travel Authorization will happen, she said.