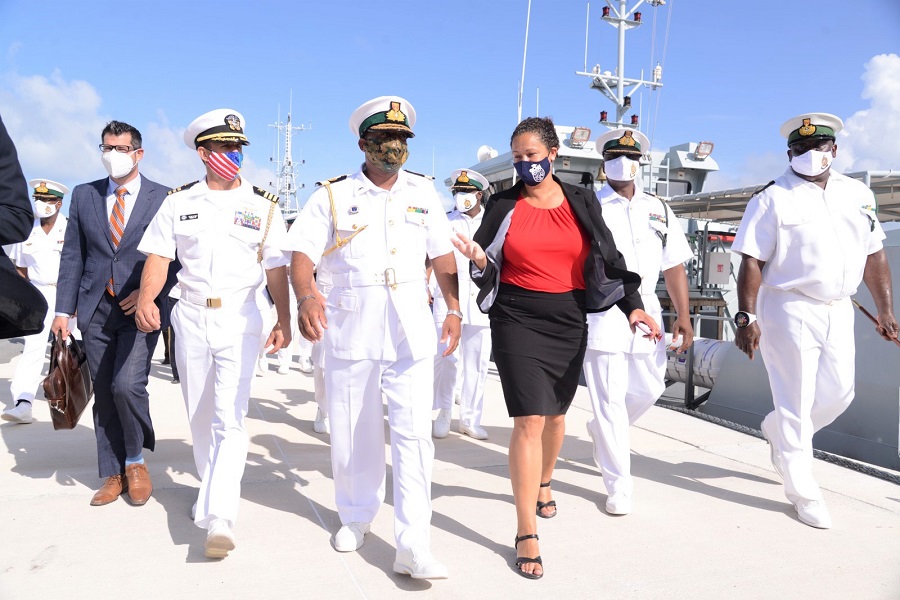 #TheBahamas, June 24, 2021 – In keeping with the Commander Defence Force, Commodore Dr. Raymond King’s strategic intent of professionalizing the organization and responsiveness to the security environment nationally and regionally, three vessels and technology equipment were presented to the Bahamas Government by the US Government on Tuesday June 22, 2021.

According to Minister Dames, the vessel, technological and biometric system equipment, which were donated by the US Government through the US Embassy to the Bahamas Government, is worth 5.9 million dollars. In thanking them, he assured his government’s commitment to continue the mutual partnership that was established since the 1980’s.

Commodore King reiterated that the safe boats will complement the existing Damen vessel classes to counter drug trafficking operations, particularly in the southeastern Bahamas, as well as counteracting migrant smuggling in the northwest Bahamas, and also increases the RBDF’s capacity and capability as a result of the donations.

“We are now phasing into decentralization, whereby these assets will greatly assist with personnel and logistics needed in the southern and northern Bahamas, who maybe there for predetermined periods. We are making positive progress in this regard,” said Commodore King. “The communication equipment enhances our capability to have effective command and control in our operations. The Biometric equipment gives us the opportunity to validate individuals we may interact with at sea. They will be able to determine which countries they are from, and background checks to see if they are wanted criminals.”

The US delegation was taken on a tour of the Defence Force Base, and also on a brief ride aboard the newly donated safe boat.

The Royal Bahamas Defence Force values its relationship with local, regional and international partners, and will continue to do its part in safeguarding and protecting the territorial integrity of the Commonwealth of The Bahamas.