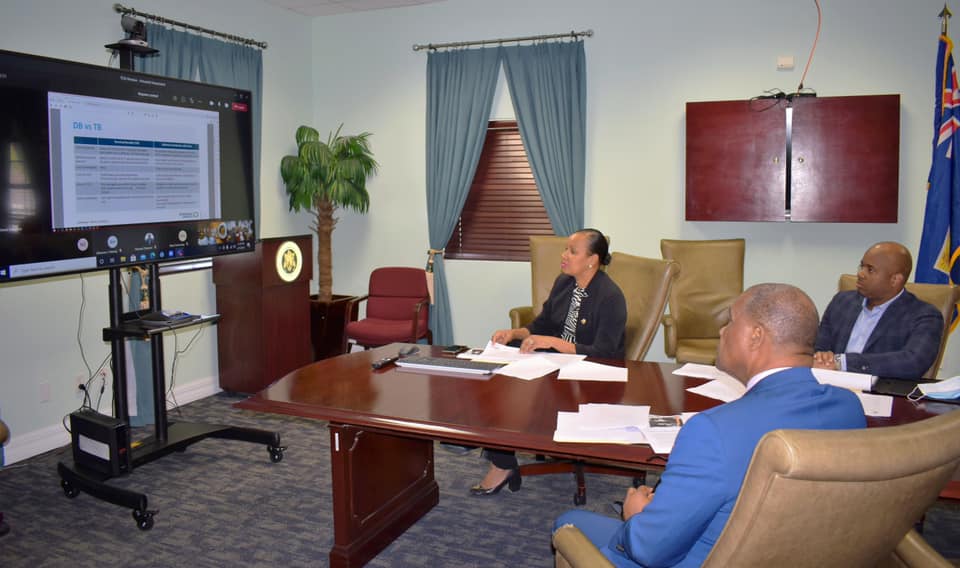 The Turks and Caicos Pension and Gratuity Program was discontinued in 2012 due to financial hardship at the time.

In 2019/2020 a consultancy was funded to review and provide options on the reinstatement of a TCIG Pension/Gratuity Program. The report was presented to the Civil Service Association and Cabinet for consideration.

Commenting on his government’s commitment to this program, Premier Misick said: “My Finance team and I were grateful for the opportunity to meet with the Deputy Governor and consultant Mr. Derek Osborne to review and discuss the contents of the consultancy previously carried out on the reinstatement of a TCIG Pension and Gratuity Program.

I was pleased with the options provided that would seek to provide a sustainable long term retirement plan for not only public servants, but also persons that serve in statutory bodies and other capacities.

As my Government prior to coming to office, committed to swiftly progressing the work and necessary funding to deliver on this important initiative, I am pleased to advise that $2 million in seed funding has already been approved in the new FSPS for this initiative, which will subsequently be included in the upcoming budget.

I look forward to Cabinet’s consideration of this proposal and to working to bring this program to fruition.”

Deputy Governor, Anya Williams in commenting said: “On behalf of the public service of the Turks and Caicos Islands my office is pleased to progress the work on the reinstatement of a Public Service Pension and Gratuity Program.

The discontinuation of a pension/gratuity program for civil servants post 1992 has caused significant concerns as persons that remain in the service are not only not entitled to the same benefits as some of their previous and current colleagues, but even pre 1992 employees that remain in service have expressed difficulty in being able to transition into retirement at the age of 60 as there is no longer the option to receive a lump sum gratuity payment to assist as was previously the case.

Our public servants carry out very important roles on behalf of the government and people of these islands and deserve to be adequately compensated for the roles that they do.

As it stands, the Turks and Caicos Government is the only territory that does not offer a pension or gratuity program for its staff which needs to be addressed.

As we work to progress the work on this initiative, following formal approval by the Cabinet we will undertake necessary consultations with the civil service on the design of the program so that we can progress the necessary legislation and funding request to the House of Assembly to facilitate the implementation of this vital program.”