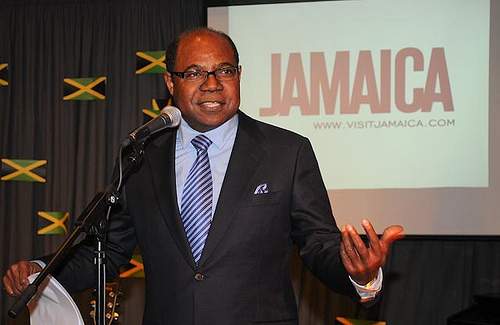 #Jamaica, May 27, 2021 – One of the country’s major European partners, Germany, no longer considers the island a hotspot for the possible contraction of COVID-19.  Flights between the two countries resumed on Sunday, May 23, a clear sign that tourism is starting to open up again in Europe, Jamaica’s third biggest market, behind the United States and Canada.

Tourism Minister, Hon. Edmund Bartlett, is pleased with the move.

“I was very happy to learn that the Government of Germany has removed Jamaica from its list of countries with a particularly high risk of infection due to widespread occurrence of the SARS-CoV-2 virus and its variants,” he said.

“This is a positive development, as it shows the Germans that we are indeed a safe destination and our efforts to contain the virus have been effective. In fact, our resilience corridor for our visitors remains safe, with very, very low incidence of positive cases,” he added.

Mr. Bartlett, who is currently on government business in Europe, where he is engaging with multiple international tourism interests, senior government officials, said the return of the European market plus the “new and interesting developments in the US” augur well for Jamaica’s tourism prospects going forward and should very soon return the island to its status as a first-choice destination.

“We have made a lot of sacrifice as a nation over the past year, sticking to our guns while implementing all the necessary health and safety guidelines,” the Minister told JIS News.

“We are now seeing, with both our airline and cruise partners, that Jamaica remains on top of the food chain… a first-call destination… and one that is ready for the post COVID-19 era,” he added.

For his part, Senior Advisor/Strategist in the Ministry of Tourism, Delano Seiveright, said major airlines have given their commitment to resume flights to the destination in the coming weeks and months.

“Germany is our second largest market in Europe, and Frankfurt is a massive and important European hub. So, we are very happy about this announcement and we are equally pleased to note that we will have the restart of twice-weekly flights, starting July, between Germany and Jamaica by Condor Airlines,” he noted.

“The Jamaica Tourist Board (JTB) has been working non-stop, despite all the crises brought on by the pandemic,” he added.

According to the latest reports from the German Health Ministry, 11.3 million Germans are fully vaccinated against COVID-19 and 33 million people have received a first dose, representing 40 per cent of the population.