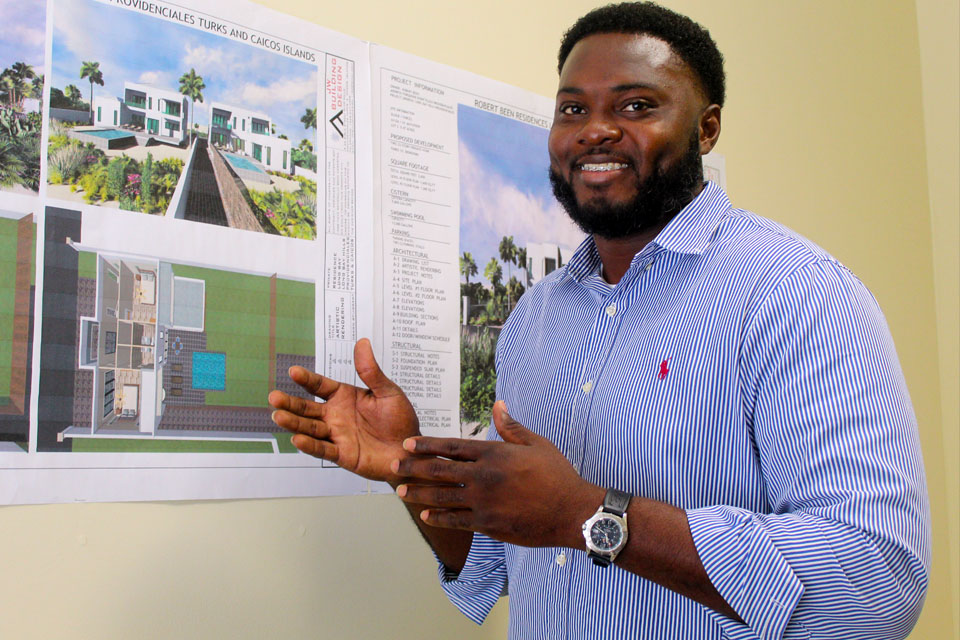 Robert Been Jr talks to Magnetic Media about interest in running in the next General Election of the Turks and Caicos Islands at his Been's Global office at Turquoise Point Plaza, Grace Bay, Providenenciales

NOVEMBER 15, 2020 – Turks and Caicos Islands – Make no mistake, Robert Been Jr is interested in running in the upcoming General Election and is hoping to secure the nod of approval for one of the At Large spots on the PDM ticket.

“I believe I owe it to the people who supported me in the last election to re-offer this time around; as you know I fell short by just 21 votes in 2016.  I want to continue to represent my main messages of anti-violence, a modernised government and empowerment of younger people of the Turks and Caicos.”

Been, a law degree holder, believes it is important for young professionals to be involved in the electoral process.

“We must have fresh, young faces and I believe I have a lot more to offer this time. The coronavirus pandemic has brought challenges for so many families, which includes younger islanders.  I found that my passion to help people has led to many people being drawn to me for assistance.  If I wasn’t helping the unemployed to improve on job letters and resumes, I was steering individuals toward job opportunities. I found myself ensuring that jobs left vacant by expat workers who had to leave the country, were filled not by more expats but by indigenous people who lost their jobs in this public health and economic crisis.  For me, serving is a labour of love.”

Robert Been is now 33-years old.  In the 2016 run-off, he was the sixth most popular candidate overall.

“I have submitted my application to the PDM to be a candidate in this election. Right now the candidates’ committee process is still ongoing.”

Since the 2016 polls, Been has expanded Been’s Global, a company he started in 2015.  Been’s Global is a property developer of vacation rentals.

“I have been reinvesting in the Turks and Caicos and demonstrating my confidence in our economy and our people.  I have created jobs, assisted others in their professional advancements and Been’s Global has sponsored a number of charities and people-building initiatives.”

The husband and father informs, that to some it may have appeared that he was quiet or disinterested in trying again for political office, but Robert Been says that is far from true.

“For those who thought my intention was not to run in this election, I wanted to take this opportunity to clear the air.  To be honest, I have never stopped working since the elections of 2016, I have always been in touch with people and people have always been in touch with me.  Social media is not really my thing, but I believe the activities which have seen my support have crossed party lines to prove that I am interested in seeing all people of the Turks and Caicos Islands succeed.”

The victorious 2016 campaign of the PDM Party was helped by a then under-30-year old Robert Been and the youth who followed him have an expectation, he says.

“I made a promise to ensure that the youth perspective is represented at the national level.  I do not take that commitment lightly.  Young professionals, who are educated and skilled, want to have a say and they also want access to opportunities to be high wage earners or entrepreneurs who are able to thrive in their home country.  When electors across the country cast their votes for me, it proved that they agree with the idea of younger generations of Turks and Caicos islanders having a place in parliament.  This time around, with the support of the youth and more seasoned voters, I believe I can get there.”

Robert Been was unable to confirm when the People’s Democratic Movement will make its candidate selection; instead there was a message for his early supporters.

“What I can say is thank you to those who have been reaching out to me and encouraging me to give it another try. I am grateful for the support and I am hoping I can count on that continued backing at the PDM party level and then again at the national level when the General Election is called.”