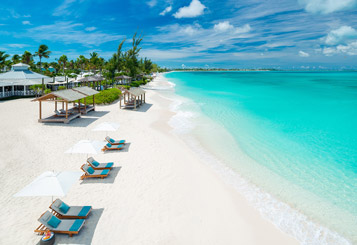 November 9, 2020 — While that’s good news for most Caribbean destinations since it’s the peak season for travel and to make money, for the Turks and Caicos Islands it’s as worrying as it is for the people of King’s Landing in Game of Thrones; bringing only fear, pain and anxiety.

But unlike the leaders in George R.R. Martin’s masterpiece who were able to find a solution to save their people, the leaders in the TCI seem helpless – or maybe clueless – to get the vital hotel sector reopened in order to save the good people of the Turks and Caicos Islands.

At the heart of it remains this ongoing, now ancient standoff with Beaches Resorts, with no sign of a resolution any time soon. But as winter’s icy touch threatens to dampen Thanksgiving and Christmas for the TCI, elsewhere the sun is starting to shine through.

This week Prime Minister of Saint Vincent and the Grenadines Ralph Gonzalves, signed off on plans to develop a 1,200 room Beaches Resort on that island! That should send a clear message to all and sundry in the TCI, that as we stand still the world is moving on, and the once precious dominion we had over the Beaches product is starting to whittle away.
Such a development would no doubt kickstart any forward thinking, progressive administration into action to seal what we have here in the TCI, but the current one can’t even solve a four-year old disagreement. What does that say for the future of the TCI? Are we going to awake one day and find out that the impossible is suddenly a reality? That we have lost our grip on the family vacation market that Beaches TCI has had for so long?

Is this the administration that will sound the death knell for travel and tourism? Only the blind will not admit that Beaches is not just the anchor resort of the TCI, it is the very lifeline that keeps our entire sector alive. Imaginary reports about rising occupancy levels do little to fill a hungry man’s belly. We all know better.

That is not meant to be sensational, but is meant to drive home a hard, hard truth, and if we think it can’t happen well guess what, it’s happening! Instead of earning money from our natural treasures as we have been doing for decades, we are now cap-in-hand for grants and loans in order keep Poor Man Hunger from whispering in Belongers’ ears.

That is the fate of people already hard hit by COVID. From one calamity to another. But while the pandemic is out of our control, the economy is something we can fix. I only wish our leaders truly cared for the suffering of people as they claim. Hand-outs are not how you empower people, you allow them to work and that then gives them dignity.

What kind of administration just twiddles its thumbs while keeping its people in financial limbo when it has the power to do something about it?  We elected you to provide solutions, not to drown us with your excuses.
This is not the Christmas Story we would have written for ourselves. We thought a new day was coming. That we would rise like our other Caribbean brothers and sisters in leading the way in controlling the pandemic; that we would set an example for how to jump-start the economy in a sustainable manner.

But alas, the skies continue to darken. The wind chills the depth of our very being. The candle 10 miles away offers no warmth. Instead of waking from our slumber we are being asked to hibernate. Winter is coming.