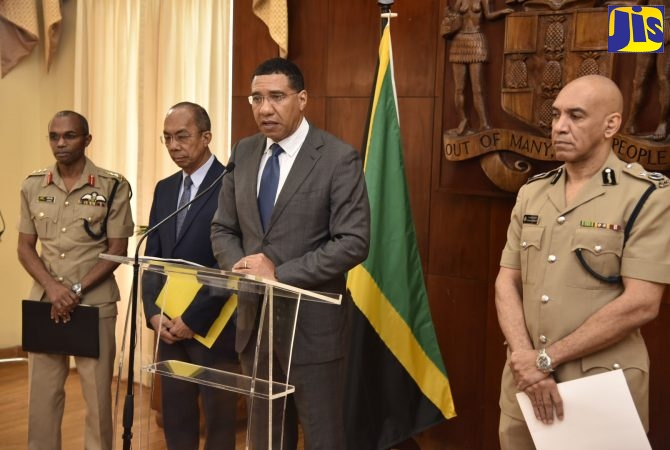 KINGSTON, Feb. 7 (JIS): The increased presence of the security forces in the Eastern Kingston Police Division under the State of Public Emergency (SOE) has put residents at ease, and they are now able to go about their normal lives without fear.

Prime Minister, the Most Hon. Andrew Holness, announced the SOE on January 26 to quell rising crime in the Division.

Speaking in the Upper House on Thursday (February 7), Leader of Government Business, Senator the Hon. Kamina Johnson Smith, said that 11 days into the SOE citizens “have started to experience a level of normalcy that has been absent from the [area] for far too long”.

“The citizens have begun to move around once more. They can once again open their shops and they can go to work… children can play again,” she noted.

Mrs. Johnson Smith was piloting the Emergency Powers (Continuance) Resolution 2020, which was approved by the Senators, paving the way for the extension of the security operation until April 25.

She noted that the SOE is crucial to addressing increasing criminal activity, including gang conflicts and murders in the Division.

She said that the spate of inter- and intra-gang feuds, which extended across several communities, had impeded public commute along major thoroughfares, restricted children’s attendance at school; prevented honest, law-abiding citizens from attending their workplaces and limited citizens’ general movement within their communities.

“Over the first 25 days of this year, 11 murders, eight shootings and three robberies took place within that Division. The Government had to respond swiftly and responsibly in order to cauterise this escalation in major criminal activity,” she said.

Mrs. Johnson Smith told the members that since the implementation of the enhanced security measure, the Kingston Eastern Division “has been demonstrating promising results”.

She said there has been “no report of a single murder or shooting” and a major housing project, which was suspended in September 2019 due to an outbreak of gang violence, is now set to restart, given the additional security presence in the area.

In addition, a total of 90 persons were taken into custody, of which 13 were detained and 77 released after processing.

The security forces have recovered an M16 rifle and more than 100 offensive weapons.

Senator Johnson Smith reminded that while SOEs “do not comprise a quick fix…they do deliver immediate impact”.

“The SOE is a necessary and constitutionally permitted measure… which helps to “cauterise and to control the literal bleeding which takes place in communities as a result of gang activity,” she said.

Mrs. Johnson Smith is encouraging residents in the area to call Crime Stop at 113 or the Jamaica Defence Force (JDF) tip line at 837-8888 to report criminal activity, noting that the lines are “completely confidential and have never been breached”.

Fifteen Senators voted to extend the SOE, with one abstaining. Four members were absent.

The extension was approved in the House of Representatives on Tuesday (February 4).