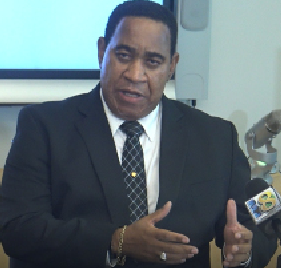 #Providenciales, June 11, 2019 – Turks and Caicos – Nearly 1,000 new hotel rooms and countless other new construction projects around the island coupled with the indisputable effects of climate change compelled Magnetic Media to enquire of the FortsTCI CEO about the company’s readiness in the face of it all.

In a word, Eddinton Powell’s answer was a resounding ‘yes!’

“So we already started to think about these things and that integrated resource plan will be executed and implemented over the next 20 years; it is a 22-year plan from 2018-2040-42.  Every three years that plan will be updated, that plan will be revised and we will take more data in.”

FortisTCI believes Climate Change is real and during a press conference held last week to address a prolonged electricity outage for the island of Providenciales, Mr. Powell assured that there is serious work happening to incorporate alternative energy forms.

A series of town meetings is one way, reminded Powell, that FortisTCI has been working with government to bring the conversation to the consumer.

“We have started (conversations) on that integrated resource plan, the RNETS, that I’ve mentioned,”  Mr. Powell added, “there were public meetings before and after the Plan, in Provo and in Grand Turk and many people came out to it, not enough because I would like to see more people come out and participate, but in that over the next 22-years up to 2040, that plan forecasts that the penetration of renewable energy on the grid will be 33 percent and actually I think it will be higher than that.”

Renewable energy dreams are, these days, a more cost-effective reality for home owners and small businesses.

FortisTCI in 2018 won the region’s CREF Award for its renewable energy strides and is the only Caribbean energy supplier which has a roof top leasing program and the owner-consumer is financially compensated.