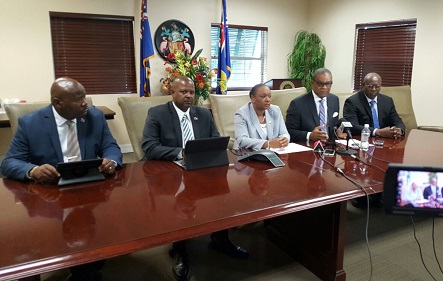 #Providenciales, May 18, 2019 – Turks and Caicos – Turks and Caicos islanders may be pleased to learn that its main political parties are already working together for a fresh approach on Constitutional Reform.  It was in December that the PDM Government, while attending the annual Joint Ministerial Council Meeting in London, tried to hold bi-lateral talks with the UK about so called, ‘regressive elements of the 2011 Constitution.

The meeting was unsuccessful, as the UK required that both the Government and Opposition, together bring the requested reforms in a bi-partisan stance.

Premier Sharlene Robinson in her remarks on Thursday applauding the UK Government’s rejection of the FAC Committee Recommendations mentions, ever-so-subtly that the People’s Democratic Movement and the Progressive National Party have resume talks.

“We are grateful that the Official Opposition has come back to the Table having issued their Position in April under new leadership. It is important now to seek the views of our people on new recommendations coming forward so that fresh recommendations can now be sent to the UK.”

It had been Premier Robinson’s view that there was no time to waste when it came to getting the constitutional reform recommendations to the UK.  The PNP told the country, that with leadership unsettled, they were not ready to resume work related to the constitution.

The general public is fiercely supportive of changes in the current form of the Constitution; strongly desirous of having powers which were stripped from elected islanders in the 2011 document, returned to the people of the Turks and Caicos Islands.