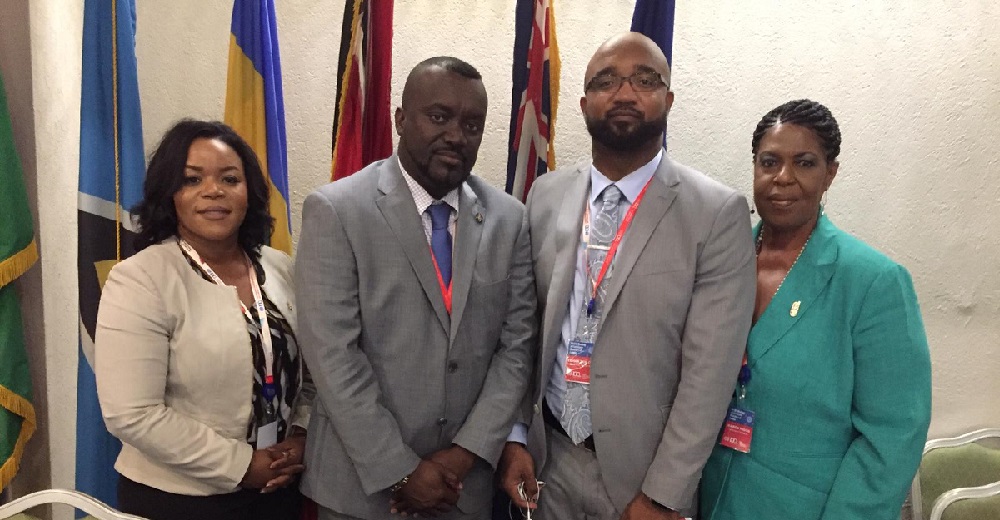 #Providenciales, May 29, 2019 – Turks and Caicos – Hon. Vaden Williams, Minister for Immigration, Citizenship, Labour and Employment Services attended the 11th International Labour Organization (ILO) meeting of Caribbean Ministers of Labour, which was held in Bridgetown, Barbados from May 14th to 15th, 2019, under the theme “Shaping a Brighter Future of Work for the Caribbean”.

Hon. Williams said the meeting of ministers and other senior officials from governments in the English and Dutch-speaking Caribbean was an enlightening experience that provided his delegation which included Deputy Permanent Secretary Ms. Althea Been, Labour Commissioner, Mr. Edwin Taylor and Executive Administrator, Ms. Karen Higgs, with a wealth of knowledge that can assist in developing and improving labour-related systems in the Turks and Caicos Islands.

“It is extremely important for the Turks and Caicos Islands as a developing country to keep pace with the latest trends, the various laws, issues, challenges and recommendations that relate to labour and work, so that we can strengthen our systems and institutions. While the dynamics in the Turks and Caicos Islands are in many ways different from our Caribbean countries, the reality is that all over the world, labour issues are contentious and complex by nature and how they are managed will ultimately have a significant impact on the performance of the economy,” Hon. Williams stated.

While in Barbados, Labour Commissioner Mr. Taylor and Deputy Permanent Secretary Ms. Been visited the offices of the Barbados Labour Department and National Insurance Board to view their operations. Commenting on the conference, Labour Commissioner Mr. Edwin Taylor said “This meeting gave us food for thought as we seek to revise our laws and work on the restructuring of the Employment Services Department. The meeting gave us a chance to compare laws, policies and gain a better understand of how those laws and policies work together for the benefit of the government and the bajan people.

We look forward to a good working relationship with the Labour Department of Barbados as we seek to find regional partners that would give our staff the necessary exposure to a wide range of Industrial Relations issues that can only enhance their overall Knowledge and add in the growth of the department.”

During the meeting, Hon. Williams and other ministers shared their experiences with new forms of employment and best Institutions of work that can adapt to it; adapting institutions for a brighter future of work, emerging of work (Telework, Platform work and Zero hours contract).

Topics covered during the two-day session were:

* Exploring new job opportunities for the Caribbean and how to support transitions. Focus on the areas of job creation, digital economy, care economy, and green/blue economy.

* The care economy, opportunities for a brighter future for work in the Caribbean.

* Job creation and transitions towards a green and blue economy.

There was also a Ministerial Roundtable discussion session on the topic: “What government, social dialogue and existing tripartite bodies can do to articulate a renewed social contract?

Discussions were also held regarding and adopting an agenda for the 108thLabour Conference scheduled for June 10thto 20th, 2019 in Geneva, Switzerland.

There were also presentations from the ILO and topics including new labour standards on violence and harassment in the world of work.

In addition to Turks and Caicos Islands, there were introductory statements at the conference from officials from Antigua and Barbuda, Anguilla, The Bahamas, Barbados, Belize, Cayman Islands, Curacao, Grenada, Guyana, Jamaica, Montserrat, St. Kitts and Nevis, Saint Lucia, St. Vincent and the Grenadines, and Trinidad and Tobago.