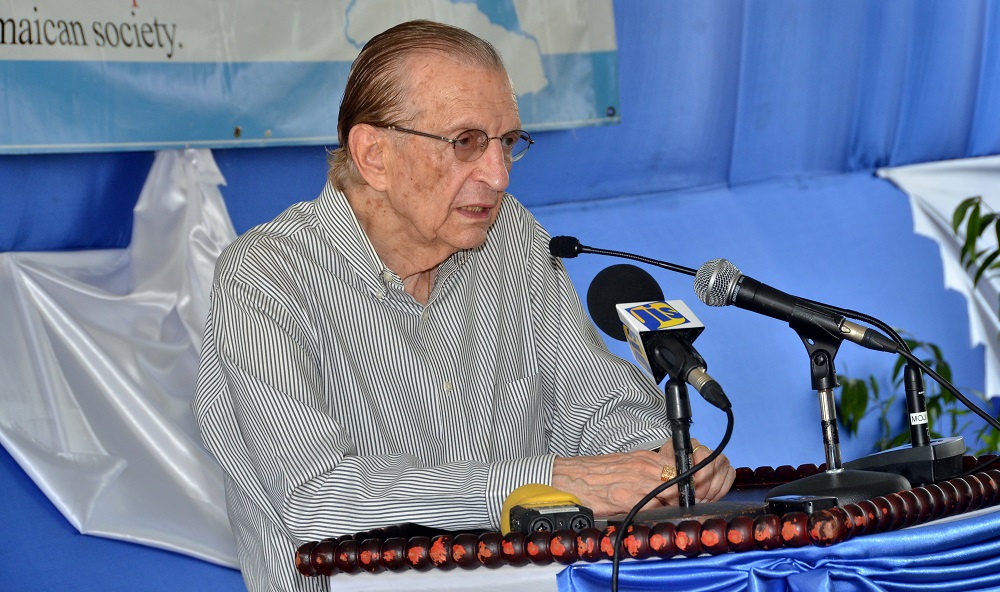 #Kingston, May 28, 2019 – Jamaica – Former Prime Minister, the Most Hon. Edward Seaga, died today (May 28), in the United States, where he was receiving treatment.

Through 43 years of unwavering service to the nation, the former Prime Minister played a fundamental role in shaping Jamaica’s post-Independence parliamentary landscape.

Mr. Seaga was one of the founding fathers who framed the Jamaican Constitution in 1961.  He initiated a rewrite of the Human Rights section of the Constitution to provide for a Charter of Fundamental Rights and Freedoms; and created the office of public defender.  The former Prime Minister was also a member of the first Parliament of independent Jamaica.

Described as a prolific, transformational leader, he had the distinction of being the longest-serving Member of Parliament (MP) in the history of Jamaica and the Caribbean region. Mr. Seaga represented the constituency of West Kingston from 1962 until his retirement from active politics in 2005.

Mr. Seaga’s legacy in shaping the country’s political history began at age 29,  when in 1959, founder of the Jamaica Labour Party (JLP), Sir Alexander Bustamante, nominated him to serve in the Upper House of Parliament – the Legislative Council (later the Senate). Mr. Seaga was the youngest member to be appointed to serve in this capacity.

After winning his seat as MP in 1962, Mr. Seaga was appointed to the Cabinet as Minister of Development and Welfare. Following the 1967 General Election, he was appointed Minister of Finance and Planning and in 1974 became the Leader of the Jamaica Labour Party (JLP), a capacity in which he served for 30 years.

Mr. Seaga became Prime Minister following the General Election of October 30, 1980. The JLP again took the helm of Government at the 1983 General Election and Mr. Seaga remained Prime Minister until February 1989.  During the course of his political life, Mr. Seaga made a significant impact on Jamaica’s growth and development through the introduction of various programmes and the establishment of institutions across the social, cultural, political and financial sectors.

Starting from as early as 1961 with Things Jamaican, Mr. Seaga also established the Jamaica Festival Movement, and spearheaded the repatriation of Marcus Garvey and his appointment as the country’s first National Hero.

The former Prime Minister also created the training institution, HEART Trust/NTA; and established the Urban Development Corporation, Jamaica Stock Exchange and Jamaica Unit Trust.  Also to his credit was the creation of the Jamaica Mortgage Bank; Students’ Loan Bureau; National Development Bank; Agricultural Credit Bank; Jamaica National Investment Promotion Ltd., now Jamaica Promotions Corporation (JAMPRO); and the EXIM Bank.  His interventions to enhance the lives of the most vulnerable were perhaps the areas in which Mr. Seaga made the most resounding impact.

In the 1960s, Mr. Seaga transformed his West Kingston constituency, then known as ‘Back-O-Wall’ into a modern, low-income residential community. It was renamed Tivoli Gardens and remains a model of successful urban community development.

Mr. Seaga launched the Golden Age Movement in the 1960s, which was a new concept in modern community care for the aged, and the first Golden Age Home was built in 1985.

Also, the Food Aid Programme was established by Mr. Seaga in 1983 to assist the poorest groups in the society by supplementing their food supply. Further, in 1970, Mr. Seaga launched the Student Revolving Loan Fund to assist needy students at the university level.

In recognition of his contributions, Mr. Seaga received several prestigious awards at the local and international levels.  Among them were the Order of the Nation in 2002, the second highest honour in Jamaica; several Doctor of Law (LLD) degrees from international universities between 1981 and 1987; the United Nations Environmental Leadership Award; Dr. Martin Luther King Humanitarian Award; and the Gleaner’s Man of the Year award for 1980 and 1981.

The North South Highway was also named in honour of Mr. Seaga in 2018.

When Mr. Seagaretired from representational politics, he accepted a post as Senior Research Fellow at the University of the West Indies (UWI) Mona campus, and was later named Chancellor at the University of Technology in 2010.  He served as President of the Tivoli Gardens Football Club, and chaired the Premier League Clubs Association.

The former Prime Minister also had several publications, including ‘Grenada Intervention: The Inside Story’;  ‘Revelations: Beyond Political Boundaries, Lectures 2005-2009’; ‘Parent-Teacher Relationships’, published by the Institute of Social and Economic Research, UWI; and ‘Revival Spirit Cults’ (Jamaica Journal), published by the Institute of Jamaica.

There are also two volumes of his autobiography, titled, Edward Seaga: My Life and Leadership: Clash of Ideologies, Volume 1; and Edward Seaga: Shaping History: Hard Road to Travel, Volume 2.

Mr. Seaga also did CD compilations of ‘Folk Music of Jamaica’ (album of music recorded by Ethnic Folkways Library), and ‘Origins of Jamaican Music: Reggae Golden Jubilee’, which was released in 2012.  During his illustrious tenure, Mr. Seaga helped to shape many political minds, including Prime Minister, the Most Hon. Andrew Holness, upon whom he made a profound personal impact.

In a 2012 tribute to Mr. Seaga in Parliament when he was Leader of the Opposition, Mr. Holness referred to him as “one who mentored and, I dare say, fathered me politically”.

Mr. Holness, who said he had the privilege of working with Mr. Seaga during his early years in politics, said he was amazed by his capacity for work and his attention to detail.

Thanking him for dedicated and faithful service to Jamaica, Mr. Holness said that Mr. Seaga’s name is “indelibly etched on almost every facet of Jamaican life”.

Header: The late former Prime Minister, the Most Hon. Edward  Seaga,  speaks at the opening of the Tivoli Gardens Restorative Justice Centre, in West Kingston, in 2017.

Third Insert: The late former Prime Minister, the Most Hon. Edward  Seaga (left),  and Mrs. Carla Seaga,  at a ceremony at  King’s House in 2016.