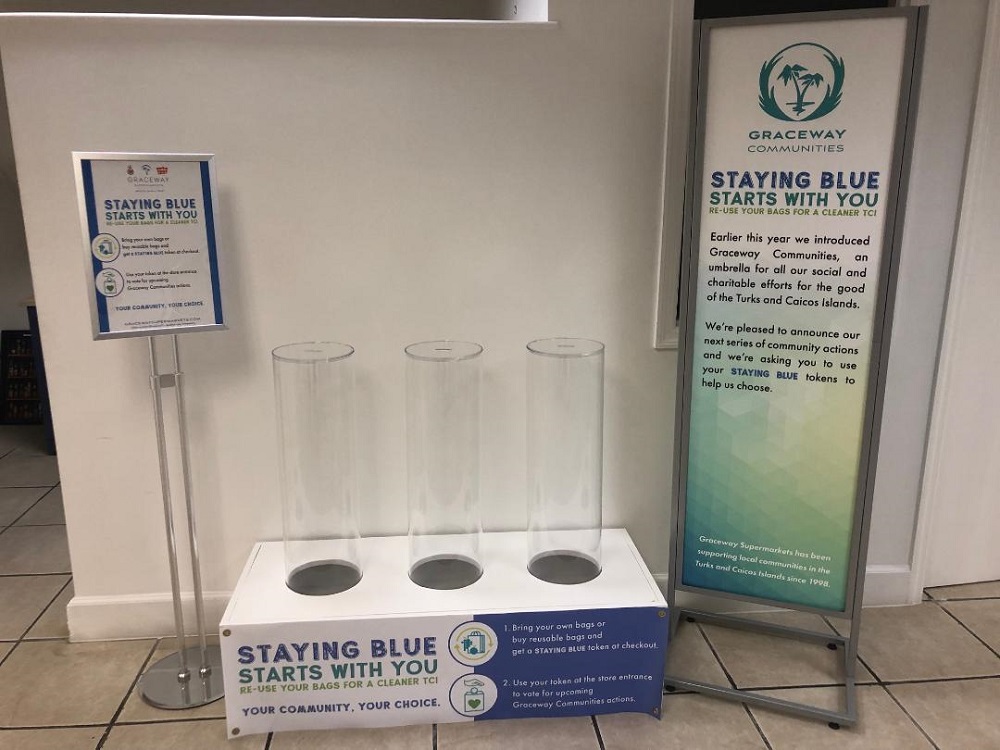 #Providenciales, April 20, 2019 – Turks and Caicos – You will be able to use your reusable bags and earn tokens at Graceway IGA on Earth Day, this coming Monday April 22, 2019; the grocery store is calling it ‘Staying Blue’.

As the Turks and Caicos Islands fast approach a radical change for environmental protection, which is an end to single use plastic bags as of May 1, there has been very little public education; however, the DECR announced that TCIG’s education efforts will ramp up as of Monday.

Graceway Supermarkets said: “We believe that the key to a cleaner, eco-friendlier TCI is re-using everything we have. This includes bags, clothing, containers and so many of the things we throw away these days.”

At IGA on Monday, there will be a prominent display set up in the foyer of the store and shoppers will be able to donate the tokens they earn for bringing their own bags to a charity of their choice.

Graceway Supermarkets explained, “Every time you bring your own bags or buy a re-usable bag you will get a token, use the token at checkout to vote for your favorite action for Graceway Communities to take, and we’ll take the action.”

On Wednesday May 1, shoppers will no longer get those plastic bags that they are used to for carrying home their store purchases.  This change, in order to reduce the impact of the toxic plastics on the environment, will take some getting used to and it may eventually mean higher bills at check out.

At Graceway Supermarkets, the increase named the, ‘Blue Ocean fee’ will come eventually and is described as nominal.

“We know this initial period will be difficult for our customers so we’re providing free alternative paper bags in all our stores. But from 1 August we will start a pilot scheme to implement a charge on single-use bags at checkout. Any money raised will all go to Graceway Communities for actions to help the environment and the TCI.”

Single-use paper bags will be provided temporarily at no charge at their six stores in Providwenciales and Grand Turk, but Graceway shared that paper bags are significantly more expensive and their goal is to help consumers shift their behavior.

“Real change needs a change in our attitudes and behavior. By putting a nominal charge on single-use bags we will drastically reduce how many are used and increase the use of re-usable bags to help the environment.”

For the grocery store conglomerate, the plan is bigger than just the ban on single use plastic bags.

“We have moved to phase out these items in our deli’s and cafe. The real problem is with littering, so we encourage both education and change in behavior on littering, as well as re-use of all types of items. We would encourage a discussion on the topic of what sectors are most polluting in the TCI (power, vehicles, desalination, construction effluent).”

Shoppers are welcomed to Graceway IGA on Monday for the Earth Day celebration.

TCI: Come out of what you are in, Come to Jesus for the real Paradise

TCI: Easter Message form the Leader of the Opposition April 2019