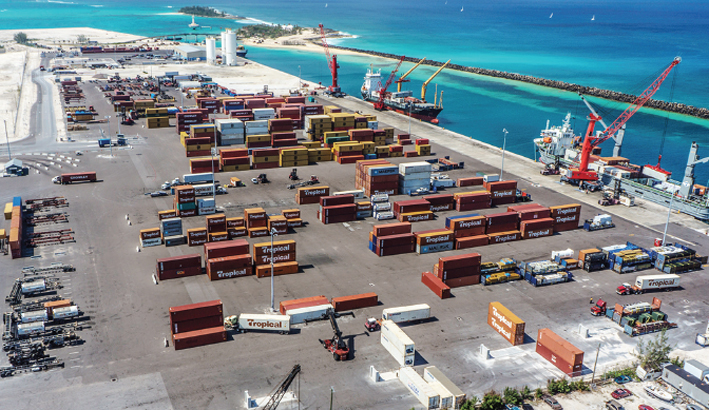 #Nassau, April 11, 2019 – Bahamas – BISX-listed Arawak Port Development Ltd. (APD), which has been heralded as “an example The Bahamas should be proud of” by the Inter-American Investment Corporation, celebrated ten years as a pioneer in the commercial shipping industry in February.

The formation of APD in 2009, which owns and operates the Nassau Container Port (NCP) and Gladstone Freight Terminal, marked the establishment of the first commercial maritime public-private partnership (PPP) in The Bahamas and provided a blueprint for similar projects to be developed across the country. One of the most significant terms of the historic project agreement was that it was the first to offer ownership shares to public servants to help make more Bahamians owners of a larger portion of the economy.

Mike Maura, Jr., President & Chief Executive Officer of APD, recalled the significant impact of the launch of this important venture.  “The incorporation of APD was a landmark event. The idea of moving the commercial shipping port out of downtown had been pursued by successive political administrations for many years.

One of the central issues that we were facing at the time was that the shipping operations on Bay Street were in direct conflict with a major part of the country’s tourism and retail sector, which negatively affected the area’s stakeholders and even national revenues. Through extensive collaboration between various government entities and other parties, we were finally able to make it happen.”

“The ownership structure under the PPP is very clear – The Government of the Bahamas invested $20 million for 40% stake in the company; twenty corporate shipping sector stakeholders invested $20 million for another 40% equity through Arawak Cay Port Development Holdings Ltd.; and the remaining 20% is fully owned by over 11,000 Bahamian public investors through their subscriptions to the $10 million IPO we offered in 2012. Since the IPO, the company’s share price has traded on BISX by as much as 74.3% over the initial offer price, establishing APD as one of the best infrastructure investments in The Bahamas to date.”

Dion Bethell, Vice President & Chief Financial Officer of APD, reflected on the financial performance of the company and other achievements earned over the years. “The benefits to the development of our country and our community since the inception of the company have been substantial. As the single largest government revenue collection point in the country, the Nassau Container Port plays a critical role in The Bahamas’ fiscal management.

Furthermore, the creation of APD has provided the government with a new income stream, contributing in excess of $35 million to the public treasury since 2012, with approximately $7 million of that number generated in 2017 alone. We’ve also donated over $350,000 to 150 charities and non-profit organizations. Over 400 Bahamians work at NCP, so it’s important for us to be socially responsible and to promote community involvement because we are the community. ”

Mr. Bethell continued, “Many of our team members are recognized internationally as industry experts. In fact, in recent years, APD employees have been called upon to make presentations on public infrastructure, container shipping, port operations, and public-private partnerships at many global conferences. We’ve also been recognized by international associations for our efficiency and reliability – we were ranked as the number one port in Port Efficiency by the Caribbean Development Bank in May 2016 and received the award for the Most Reliable Port by the Caribbean Shipping Association in October of that year.”

Mr. Maura shared his appreciation for his team, stating,  “We are extremely proud of all we’ve accomplished over the last ten years and the impact that our Bahamian team has had on the regional maritime sector.  It is my sincere pleasure to thank the employees of APD Ltd., our shipping partners, the men and women which work tirelessly every day in our maritime space and each of the various government agencies who have supported us on this journey. I must make special mention of the 10-year partnership with Bahamas Customs and the Ministry of Finance which has directly influenced the port’s success. Through their diligence and commitment, APD has become an internationally-renowned model for excellence in port operations and commercial shipping. We are among the best and the brightest in the world, and we’re delighted and grateful to be able to say that.”

Over the next few months, APD will host a series of events and activities to educate the public about the necessary and valuable role of the many maritime stakeholders that support its operations. These include agencies involved in environmental protection & management, international & domestic shipping, national and border security, health & safety, road safety, and trade & commerce.

These initiatives will also help the public understand more about operations at Nassau Container Port, emerging careers in the field, and how the work of the port and maritime community impacts our economy and the lives of everyday Bahamians.