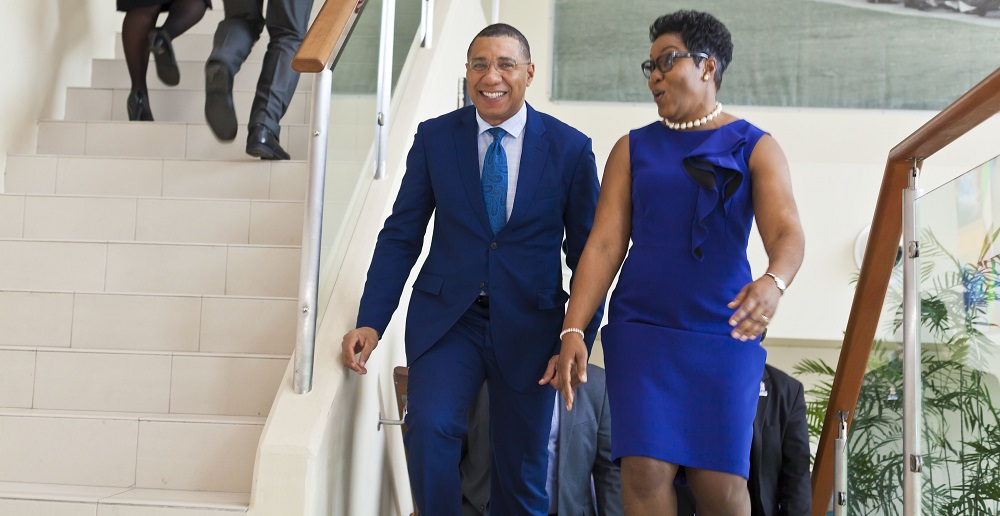 #Kingston, March 12, 2019 – Jamaica– Prime Minister, the Most Hon. Andrew Holness, says the Government is pursuing gender equity as a condition for inclusive socio-economic growth and development.

As such, he said that many of the policy initiatives coming out of the 2019/20 Budget presentation will have significant impact for women, particularly those in the micro, small and medium-sized enterprise (MSME) sector.

Mr. Holness was delivering the main address at the Henlin Gibson Henlin’s inaugural ‘Women in Law Jamaica’ conference at the University of the West Indies (UWI) Regional Headquarters in St. Andrew on Friday (March 8) under the theme ‘Celebrating Trailblazing Women in Law – Be Inspired’.

The Prime Minister said that gender equality “is not just a fashionable catchphrase but something that is important in tackling poverty… and ensuring the inclusive development of the society”. This, he noted, as most households in Jamaica are headed by single females.

Mr. Holness said that gender equity policy must also address violence against women in the home and society.  He pointed out that the Sexual Harassment Act, which is to be tabled in Parliament, is designed to address unwanted sexual advances that women face in the professional environment.

He noted that even as the Government seeks to address these violations through the legal framework, the family has an important role to play.

“It is important that mothers, fathers and older siblings mainstream, when dealing with young men, that they must respect women, the inviolability of the person, because touching in our society is seen as accepted and normal,” the Prime Minister argued.

He noted that “once the legal framework is in place, you will find that many young men (may) find themselves in conflict with the court and the law, because of their socialisation”.

Head of Henlin Gibson Henlin, M. Georgia Gibson Henlin, chronicled the significant strides made by women in the legal profession.  She noted that many qualified female lawyers could not practise law because the male-dominated firms would not hire them.

“It was a long and challenging journey. Although women joined the legal profession in 1948, not much advancement was made before or immediately after Independence nor in the 20th century, as attitudes did not keep pace with legislation, Ms. Gibson Henlin said.

She noted that even today, it is still not unusual to hear that law is a traditionally male-dominated profession, noting that the island’s first female Chief Justice, Prime Minister and Director of Public Prosecutions (DPP) “have all only happened within the last 15 years”.

Photo Caption: Prime Minister, the Most Hon. Andrew Holness, engages with Attorney M. Georgia Gibson Henlin, just before delivering the main address at the Henlin Gibson Henlin’s inaugural ‘Women in Law Jamaica’ conference at the University of the West Indies (UWI) Regional Headquarters in St. Andrew on Friday (March 8) under the theme ‘Celebrating Trailblazing Women in Law – Be Inspired’.