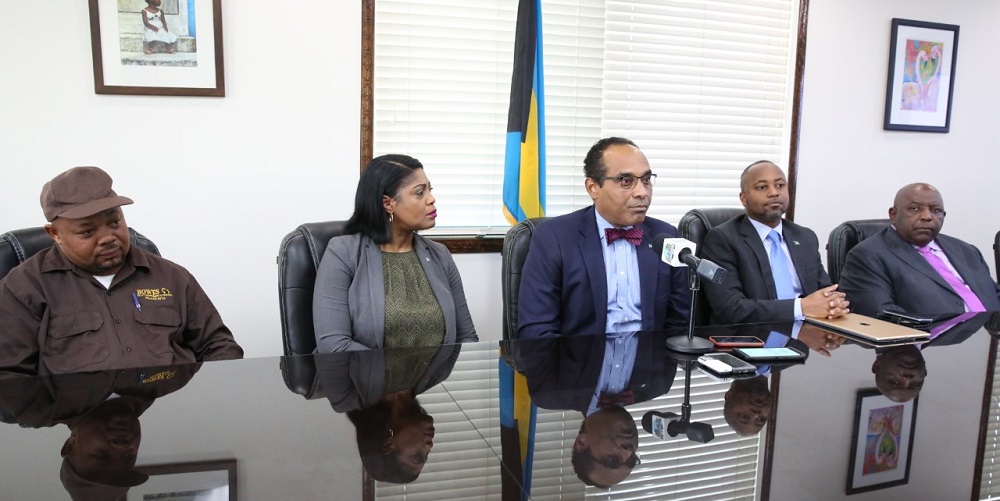 #Freeport, GB, March 15, 2019 – Bahamas – Minister of the Environment and Housing, the Hon. Romauld Ferreira, along with Minister of State for Grand Bahama, Senator the Hon. Kwasi Thompson and Member of Parliament for West End and Bimini, Pakesia Parker-Edgecombe came together in the Office of the Prime Minister for the signing of a contract, for the clean-up of the West End dump, Thursday, March 14, 2019.

Senator Thompson noted that the current West End dump site was set in place as a temporary stop gap measure for the depositing of debris and solid waste that remained after Hurricane Matthew in 2016.

However, he noted that throughout the years, the site has become an eyesore and an environmental health issue for the residents of and visitors to the West End community.

“Today, I am pleased to announce that after strong representations from the Member of Parliament as well as the Administrator, the Office of the Prime Minister Grand Bahama has been given the mandate along with the Ministry of the Environment and Housing, to pool our resources and to clean-up the unsightly location,” said Minister Thompson.

“The Ministry of Works has assessed the site and they have informed us that there is approximately one acre of land along Bayshore Road with 260 plus tons of debris.

“It is our intention to keep this site clean and limit the amount of waste that is being deposited until a more permanent transfer site can be established. Rest assured, we are actively working on establishing a more suitable site for the community of West End.”

The clean-up will be carried out by a resident of West End, Ian Bowe, and his company. They were awarded a contract for $81,000. Minister Thompson said he has been assured that with the help of his hardworking team, Mr. Bowe will get the job done efficiently and swiftly.

The Minister of the Environment and Housing, said he was happy to have his Ministry be a part of the clean-up in West End.

He noted that the last time he was in Grand Bahama, he led the launch of the “Be a Hero” clean-up campaign for Freeport. The program focused on encouraging young people to take pride in their environment and initiate clean-up projects.

“The second phase of that campaign involves reaching out to communities and associations, like church groups and civic groups. So, this then becomes our first program where we are working with an Association and the Member of Parliament for a particular area,” said Minister Ferreira.

“We want to make a meaningful contribution in the lives of the people that live in West End, and who have to pass that dump every day. We want it to be impactful for them, because they deserve a clean environment like everyone else.

“We make this appeal, as we go into the second phase of our ‘Be a Hero’ campaign that the people can reach out to us because the Ministry of Environment works for the people of The Bahamas. So we look at this project as an essential component of our work.”

The signing of Thursday’s contract was as a result of persistence that paid off.

Both Minister Kwasi Thompson and Minister Romauld Ferreira admitted that the Member of Parliament for the West End and Bimini constituency, and Parliamentary Secretary in the Office of the Prime Minister, was very persistent in appealing for something to be done with the West End dump.

“We congratulate her for her persistence and we assure her of our continued support in all worthwhile endeavours,” added Minister Ferreira.

“In coming to office, our constituents were very concerned about the eye sore of the dump and since then, we have been working feverishly to bring a remedy to the situation,” added Mrs. Edgecombe. “It is very important that we keep our environment clean. I believe that we are a product of our environment and for West End, we do not wish to have any garbage at all.

“I take this opportunity to appeal to the residents of West End that in the cleaning up of this site that we move forward together to ensure that our community is kept clean. We are going to work towards making sure that all of our surrounding areas are cleaned and that includes the entire West Grand Bahama district.

“So, you will see in the coming weeks and in the coming months that intense clean-up campaigns will be underway. We do not think of just today, but we think about the future and every day to make sure that our environment remains clean.”

Minister Thompson invited every resident of West End to partner with the government, as it works to clean-up the environment and reduce the incidences of indiscriminate dumping in the West End community.

Photo Caption: Minister of the Environment and Housing, the Hon. Romauld Ferreira (Centre) along with Minister of State for Grand Bahama, Senator the Kwasi Thompson (second from right) and Member of Parliament for West Grand Bahama and Bimini, Pakesia Parker-Edgecombe (second from left) were all a part of a contract signing for the cleanup of the West End Dump, during a press conference, Thursday, March 14, 2019, in the Office of the Prime Minister. Also on hand were Permanent Secretary in the Office of the Prime Minister, Harcourt Brown (right) and Ian Bowe of Bowe’s Trucking and Contractor for the clean-up project (left).