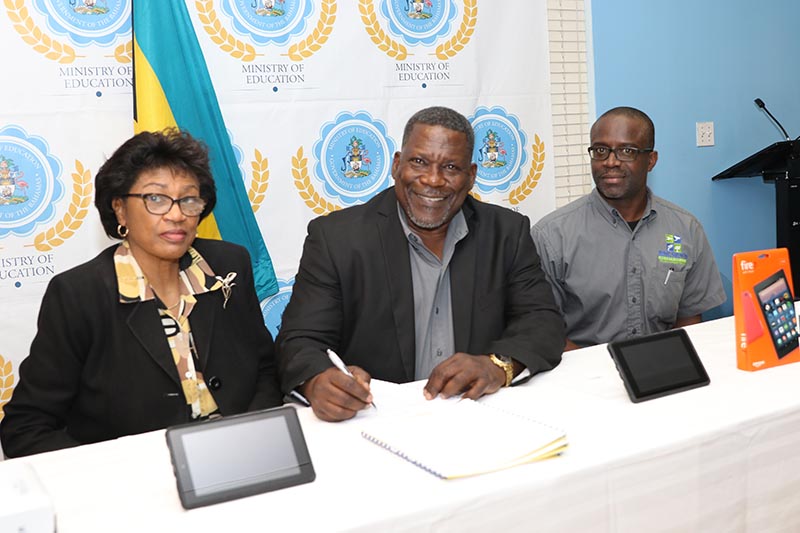 #Nassau, February 15, 2019 – Bahamas – The Ministry of Education signed a $3.3 million contract with Walker’s Industries Ltd., February 13, 2019.  The signing of the contract is part of its ‘One Network’ project and marks the final of four contracts to execute the full digitization of the public school system. The Ministry previously signed contracts with BTC, Cable Bahamas and Sam’s Business Machines.

During a Ministry of Education press conference and contract signing ceremony, Minister of Education, the Hon. Jeffrey Lloyd said that this contract facilitates the creation of wireless internet connectivity in the school system, laying the groundwork for the realization of tech-smart campuses throughout the country. Walker’s is partnering with US-based technology giant, Cisco Systems in order to facilitate the project.

Minister Lloyd said that the system will be very beneficial to students.  “One significant benefit, among many others, of such a smart-system would be the provision of distance education capability for our now deprived students wherever they may be – and there are many.”

The Minister said that within the overall objectives of the contract is a pilot initiative scheduled to be completed over a three-month period.  The initiative will feature four schools, which will be utilized to target distance learning education via a virtual classroom platform. The schools are Anatol Rodgers High, Old Bight High, Moore’s Island Comprehensive and North Eleuthera High.

Minister Lloyd said that with this virtual classroom platform, students throughout the country will be able to access education in a more equitable way.

“In the Bahamian context, some of our students, particularly those in the far flung family islands, have suffered the ignoble perennial deprivation of specialists teachers in subjects areas such as Maths, Science and Technology,” said Minister Lloyd. “When we consider that education is a fundamental right, and the surest path to sustainable development for any society, any deprivation being experienced by our students or teachers, cannot be accepted. This is why digitization of the Bahamas school system is one of the pre-eminent mandates of this government.

A critical component of the pilot project by Walker’s and Cisco will be distance education.  In the instance where a school such as Old Bight High may be short for a Math, Science or Language teacher, those students could be connected though an on-line platform to a class at Anatol Rodgers High, where that subject is being taught and receive real time, interactive instructions. And since the platform would be in a video format, students would be able to access the session as needed.  Teacher shortage, therefore, becomes a thing of the past.

“We are aware of the need to be accountable when dealing with our most important resource – our children – so we want to ensure that we put in place a programme that will be effective in producing reliable results sustained over the long term. For this reason, we have chosen to initially carry out this online programme on the aforementioned schools.

Also in attendance at the contract signing were: Permanent Secretary at the Ministry of Education, Lorraine Armbrister, who delivered brief remarks and Senior members of the Ministry’s Executive team, including: Acting Director, Marcellus Taylor, who discussed some of the issues the technology would address; Deputy Director of Technology, Julian Anderson, who gave an overview of how the technology would be utilized and the representatives from Walker’s Industries — Hilliard Walker and Jonathan Ford who explained how the work would be carried out.

Insert: The Government of The Bahamas has embarked on transforming the public education system with full digitization of schools, Minister of Education the Hon. Jeffrey Lloyd (fourth left) announced, February 13, 2019.  The ceremony marked the final of four contract signings to accomplish the goal.