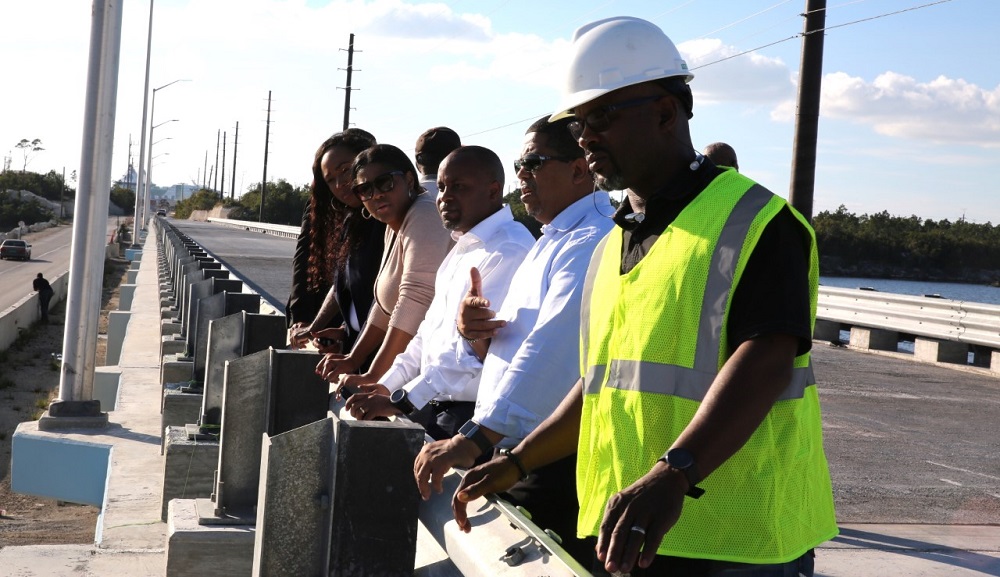 #Freeport, GB, January 22, 2019 – Bahamas – As some of the capital projects in Grand Bahama near completion, and some are still in the stages of development, frequent inspections by Government Ministers and Parliamentary Secretaries continue to be carried out.  The latest visit took place Friday, January 18, 2019. 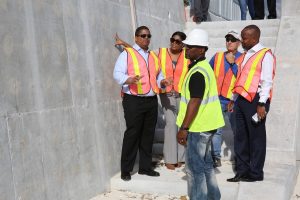 The first stop was the Sea Wall at Smith’s Point.  The project is nearing completion, with just a few more railings left to be put in place.  The wall has been completed and the road has been paved, with a new sidewalk in place.

“As it now stands, we are in the final stage of the construction of this wall,” said Parliamentary Secretary in the Ministry of Works, Iram Lewis.  “We are awaiting the arrival of a second batch of top railings and as soon as those are in place, we will carry out a final testing to assure stability and then we will start the planning of the opening of the Seawall.”

Mr. Lewis said that based on comments he’s received from the residents of the community, they are elated about the new seawall and anxious to have the road re-opened so that the fish fry event can be carried out to its fullest.

The Sea Wall project was started some seven years ago, when in a town meeting, the issue of corrosion of the shoreline was raised by the residents of Smith’s Point.  Representative of the constituency, the Hon. Peter Turnquest, who was in opposition at the time, advocated to the then PLP Government about the issue and they acceded to that request and began some work.

The original contractor of the project was discharged and Waugh Construction was brought in to complete the project.

“They have done a fantastic job,” said Minister Turnquest, who was visiting the seawall on Friday past.  “I cannot say enough about the work that they have done.  The quality of work, the way they have kept the site and the way the job has been run.

“I think for the future, this will bode very well for the community of Smith’s Point, as it will open up not only the existing bars and restaurants that we have along this strip, but it will give us additional opportunities for other 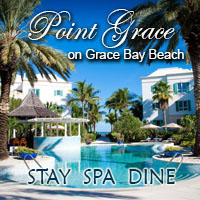 entrepreneurs to hopefully take advantage of this wonderful piece of infrastructure to make a living for themselves.

“I anticipate that we will draw enough visitors to this area so that we can create full employment in this community. That is certainly the goal.”

Minister Turnquest said that plans are underway to have local artists create attractive murals on the wall that speaks to the culture of the Bahamas and serve as an attraction to visitors to the community, where the local “fish-fry” is held on a weekly basis.  The seawall project represents around $7 million in government investment.

“One of the things that the government has been mandated to do is to continue to increase the economy of Grand Bahama and these kinds of projects allow businesses to benefit,” said Minister Thompson.

The bridge at the Fishing Hole Road is also nearing completion, although there are still some things that need to be done, including the installation of culverts.

Parliamentary Secretary in the Office of the Prime Minister, Pakesia Parker-Edgecombe, who is also the Member of Parliament for West End and Bimini, noted that the bridge will play a significant role in the lives of residents living in Eight Mile Rock and in West End.

“This bridge has been a long time in coming: the residents in West Grand Bahama have called for the construction of this bridge for many years,” said Ms. Edgecombe, during a tour of the project.  “We are happy that it is near completion.

“We remember how in the past, whenever bad weather rolled in and the water at the Fishing Hole Road rose, the road would flood, making it impossible for cars to pass.  Residents in the West could not get into the city of Freeport and residents in Freeport could not get home into Eight Mile Rock or into West Grand Bahama.” 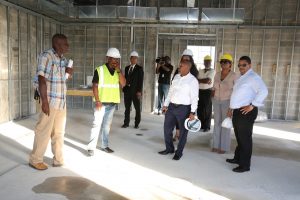 The bridge, which is being constructed by All Bahamas Construction Company Limited (ABC), is expected to be completed by summer of this year, weather permitting.  Once the new bridge is completed, the old road now used to get into Eight Mile Rock and West Grand Bahama will be used as a Service Road for heavy trucks.

The team also toured the site of the new Government Complex that is being built in Eight Mile Rock.  The public-private partnership project is still in the construction phase, with attention to detail being admonished by officials from the Ministry of Works.

Both Minister Turnquest and Minister Thompson said that they are satisfied with the progress that is being made on the project in Eight Mile Rock.  On the same compound where the Government Complex is being built is a new court house and police station that will service Eight Mile Rock and West Grand Bahama.

AT THE WALL – Deputy Prime Minister and Minister of Finance, the Hon. Peter Turnquest (left), along with Minister of State for Grand Bahama in the Office of the Prime Minister, Senator Kwasi Thompson (right); Parliamentary Secretary in the Ministry of Works, Iram Lewis (foreground) and Parliamentary Secretary in the Office of the Prime Minister, Pakesia Parker-Edgecombe, join Mr. Waugh of Waugh Construction as they look at some of the completed work at the Sea Wall Project in Smith’s Point.

ON THE BRIDGE – During a tour of the bridge at Fishing Hole Road, Senator Jasmin Dareus (left), Parliamentary Secretary Pakesia Parker-Edgecombe (second from left) and Parliamentary Secretary in the Ministry of Works, Iram Lewis (right), join Deputy Prime Minister and Minister of Finance, the Hon. K. Peter Turnquest and Minister of State in the Office of the Prime Minister, Senator Kwasi Thompson as they inspect work at the new bridge on Friday, January 18, 2019.

INSIDE COMPLEX – Deputy Prime Minister and Minister of Finance, the Hon. Peter Turnquest (right), Minister of State for Grand Bahama Senator Kwasi Thompson, along with Parliamentary Secretaries, Pakesia Parker Edgecombe and Iram Lewis, take a closer look at works taking place at the Government Complex being constructed in Eight Mile Rock, during a tour on Friday, January 18, 2019.