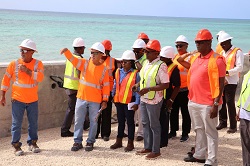 “We came out here because what you see is a seawall that was improperly built.  It has not given the people of Grand Bahama value for their money and you’ve seen where this was improperly done.  The wall further down has actually separated, and there are a number of issues which ought never to have happened. 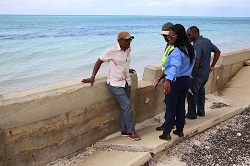 “We’re going to have to do some things to remedy this but we’re very concerned about the quality of work we get from contractors with respect to seawalls and other protective mechanisms for the people of Grand Bahama and the people of The Bahamas.”

It is important, the Minister noted, that people see what has happened with their tax dollars and the way it has been wasted with “shoddy work, shoddy workmanship, work that’s not going to last, and we have to ensure that this doesn’t happen again.”

Antonne Taylor, Engineer (Coastal/Structural), said that the shorelines need to be made more resilient to coastal hazards.  To this end, he said, well-built coastal protection is needed, and the seawall in High Rock is an example of one done incorrectly.

“As a result, it’s suffered the various damages.  Going forward, we have to make the necessary recommendations and works to ensure the proper functionality of the seawall.” 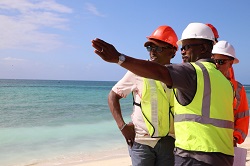 The seawall was built in 2004 and there is not yet a timeline for the repairs.  The Minister added, “It’s a good contrast to see the quality of work that you saw at Waugh Construction and how that can protect a community, and when you have something like here that’s not tied in properly, it’s not backfilled properly, it comes back to haunt you in a few years.”

With hurricane season fast approaching, concern was expressed by the Minister as to whether the seawall will protect or harm the residents.

Earlier on Friday, the delegation toured the seawall in Smith’s Point. Following that tour, the Minister expressed pleasure in the work. He said that in his tenure as Minister for almost one year, that project makes him “most proud.”  He said, “You’ll remember when I started as Minister of Public Works, this project was lagging. It was quite a bit behind time.” Having visited the island on a private visit, the Minister saw the condition of the seawall and said at the time he was not pleased.

The right decision was made, he said, when the former contractor was terminated and Waugh Construction was brought in.  “They have shown extreme, outstanding professionalism in getting the job done.  When you see something like this that is going to protect the community and you see what they’ve done here. The beach is coming back and so you’ll be able to walk on the beach.  The amount of erosion that they had on this beach before, the sand is now coming back naturally because of the work that they’ve done.” 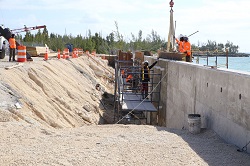 Minister Bannister said he was particularly proud that there were Bahamians doing the work.

Toni Hudson-Bannister, officer in charge of the Ministry of Works and Utilities in Grand Bahama said that the original project amount was $4.8 million and is expected to be completed in June, at the beginning of Hurricane season.

Minister Bannister, along with other staff from the Ministry of Works in Nassau, arrived in Grand Bahama on Thursday, when they toured a number of projects in West Grand Bahama.

Header: While touring the construction site of the seawall in Smith’s Point on Friday, April 13, Minister of Public Works, the Hon. Desmond Bannister, along with other officials from the Ministry.

First insert: Minister of Public Works, the Hon. Desmond Bannister, toured the construction site of the Seawall in Smith’s Point on Friday, April 13. The Minister, along with other officials, are seen having the work explained by personnel of Waugh Construction Company.

Second insert: Minister of Public Works, the Hon. Desmond Bannister, was not pleased when seeing the damaged seawall in High Rock.  Minister Bannister is seen with Parliamentary Secretary, Iram Lewis and Toni Hudson-Bannister, officer in charge of the Ministry of Public Works in Grand Bahama.

Third insert: Parliamentary Secretary in the Ministry of Works, Iram Lewis, is seen talking with the Minister of Works, the Hon. Desmond Bannister, during a tour of the seawall at Smith’s Point on Friday, April 13.

Fourth insert: The seawall in Smith’s Point is progressing, and expected to be completed around the beginning of the 2018 Hurricane Season. Workmen of Waugh’s Construction, the contracted company, are seen working while Minister of Public Works, the Hon. Desmond Bannister, toured the site on Friday, April 13.