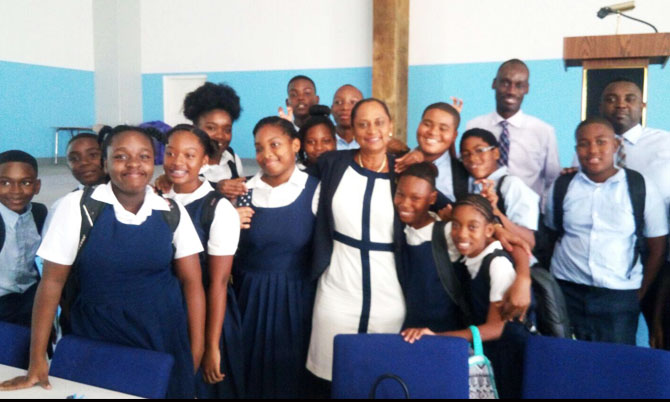 #GRANDTURK, Turks and Caicos Islands – November 24, 2017 – The Ministry of Education and Youth has had a bitter sweet week in the Turks and Caicos Islands; starting with a riot type fight at Clement Howell High but mushrooming more positively to a donation acceptance from the Amanyara Resort for CHHS students to the resumption of its Youth Listening Tours and capping off this holiday week with a report that all schools in the country – public and private – are back to normal following the double hit of Irma and Maria, hurricanes in September.

Minister #KarenMalcolm in a media release explained that UNICEF was truly instrumental in a return to normal life at schools across the country, schools which had only been open a mere few days before the debilitating blow dealt by Hurricane Irma.

“The Return to Happiness programme has also promoted the concept of safer schools through the implementation of initiatives and procedures which seek to prepare students to effectively address incidents which threaten their livelihood.”

In an attempt to assuage fears that the home of the Eagles is out of control with regular fights being reported at Clement Howell High, the Ministry of Education shared in the same release that, “although some schools continue to experience episodes of conflict, restlessness and indiscipline among its student body, most schools throughout the Turks and Caicos Islands have returned to a state of normalcy.”

On Tuesday, the day after the melee at CHHS, the #Amanyara Resort was on hand for a major donation to help the future builders of the TCI with much needed supplies for their lessons.  A wish list of the Industrial Arts Department of the school was 95% fulfilled by the Amanyara resort.

TCIG Education also reported that so far HJ Robinson High in Grand Turk has had its Youth Listening Tour experience.  Part two of the rounds of meetings with the TCI’s teenagers kick-started on Monday at the high school. 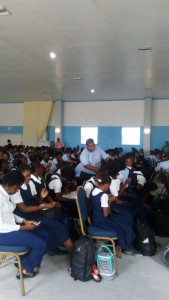 Minister of Youth, Karen Malcolm explained, “The primary goal is to listen and to seek feedback on the most important issues that young Turks and Caicos Islanders face.  The acting National Youth Director will be gathering data on how young people perceive issues affecting them and using that to inform eventual policy recommendations.”

More meetings are coming, in fact the tour will move to Clement Howell and Long Bay high schools on November 29th; December 1st will be British West Indies Collegiate, Maranatha Academy and Wesley Methodist.  December 4 is for Marjorie Basden High in South Caicos, December 5 for Raymond Gardiner High in North Caicos and December 6 is the Youth Listening tour date for TCIPS, Holy Family Academy and Champions for Christ.