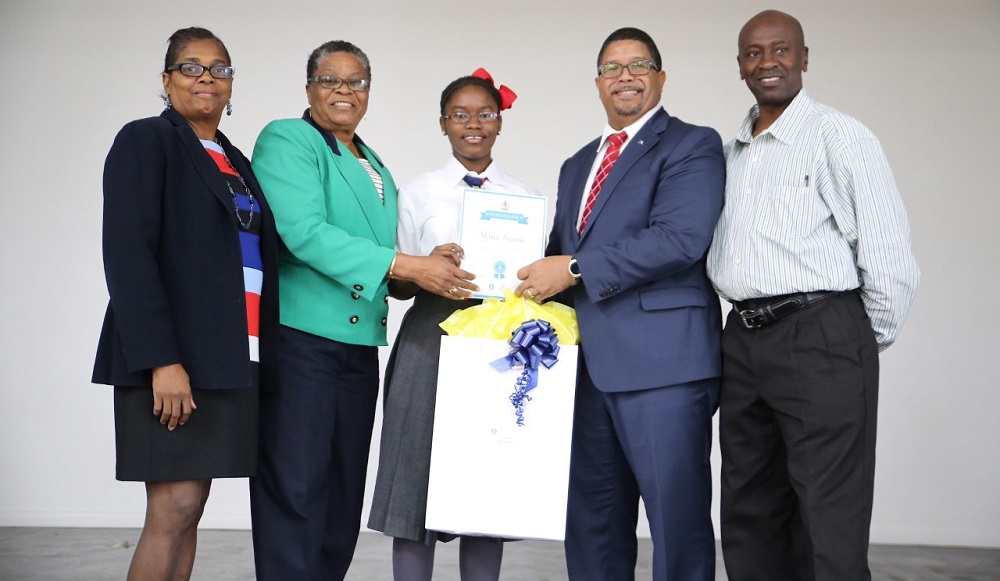 #Bahamas, November 2, 2017 – Nassau – The Bahamas will, eventually join the World Trade Organization and as a result there will be some demands placed on The Bahamas, which will be designed to reduce “artificial barriers to trade”, and cause the free flow of goods and services across borders.   This reality was brought to light to a group of primary and high school students by Deputy Prime Minister of The Bahamas and Minister of Finance, the Hon. K. Peter Turnquest.

“Traditionally, we earn most of our revenue through border taxes, customs duties and as we join the WTO, they are going to require us to reduce those taxes, either to zero or to the very low administrative rate, and as we do that, we are going to have to figure out how to replace that revenue, because we need money to run the government.

“That will mean that we will have to look at new forms of taxation or how we increase the yield we earn on existing taxes.”

The Finance Minister spent the first part of his morning on Monday, October 30, 2017, with the children at Mary, Star of the Sea Catholic School, where, following the school’s assembly, he presented a student with a special gift for an outstanding accomplishment.

Yana Swain of Mary, Star of the Sea Catholic School, was the National winner of an Essay competition, hosted by the Caribbean Organization of Tax Administrators, which was held in June of 2017. The theme of the essay was “Reformation of Taxes”.

Within the context of her essay, the young, grade eight student offered some suggestions as to how the government can go about implementing the necessary taxes in the country, in order to increase revenue.   Suggestions of income tax, asking those who make more money to pay more taxes, while at the same time increasing the national minimum wage, were among Yana’s ideas.

“Yana, if I had a junior minister of Finance, you probably would qualify,” Minister Turnquest jokingly suggested.   “Some of the ideas you presented are the same which some people may be thinking about and some ideas I dare not even speak about.

“But the truth is, if we are going to compete and continue to keep up with the rest of the world, we’re going to have to be creative about how we address this whole issue of raising Government revenue.”

Minister Turnquest told the student body that the Government must look at ways of making the whole process of paying taxes much simpler. The idea of consolidation of some taxes was one of the suggestions by the Finance Minister.

“Right now we still operate on a system — other than Value Added Tax — that we inherited from our Colonial days,” added Minister Turnquest.   “We have stamp taxes, excise taxes and other kinds of taxes. So we need to consolidate in order to make the tax paying experience smoother, easier and encourage them to comply.”

The Deputy Prime Minister congratulated Yana for her creative ideas and for thinking outside of the box.   He also encouraged the entire student body to continue to set the example for other schools in Grand Bahama and throughout the Bahamas.

“Mary Star has a tremendous legacy of producing successful people,” added Minister Turnquest.   “For years, when it came to the sciences, you have been on top and your performance in the SCEME competition is legendary.   I hope that you will continue to push forward in science, in technology and in engineering, because that is the new frontier and that is where we need to take this country.

“We need to recreate ourselves to being something more than just service oriented.   So, I encourage all of you to continue to be creative and to think outside of the box. And let’s remember, Yana’s accomplishment was not just for Grand Bahama, but she came out on top of all entrants throughout the entire Bahamas.” 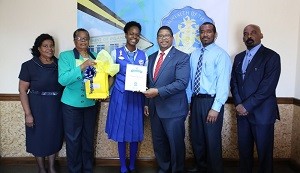 Before going to his office to begin his day in helping to govern the country, Minister Turnquest stopped by the Internal Revenue office to present another student with her third place award for the same essay competition.

D’Asia Russell of Eight Mile Rock High School finished third overall in the National competition. In presenting D’Asia with her gift and certificate, Minister Turnquest said that her accomplishment was special because she represented the public school system.

OUTSTANDING JOB – Deputy Prime Minister and Minister of Finance, the Hon. K. Peter Turnquest (second from right) presents Yana Swain of Mary, Star of the Sea Catholic School, with her certificate and award for winning the essay competition hosted by the Caribbean Organization of Tax Administrators. Under the theme, “Reformation of Taxes” the essay competition was held in June of this year and Yana won over all of the entrants from The Bahamas. Also on hand for the presentation, which took place on Monday, October 30, 2017 at Mary Star, were Rosemary Pintard-Bowe, Acting Comptroller for the Department of Inland Revenue (second from left); Vice Principal of Mary Star, Mrs. Hanna (left) and Yana’s dad, Denzel Swain (right).  (BIS Photo/Lisa Davis)

CONGRATULATIONS D’ASIA – D’Asia Russell of Eight Mile Rock High School (third from left) receives her certificate and prize from Deputy Prime Minister and Minister of Finance, the Hon. K. Peter Turnquest (third from right) for her third place finish in the Caribbean Organization of Tax Administrators essay competition, which was held in June of this year.  D’ Asia finished third nationally. Also on hand for the presentation on Monday, October 30, 2017 at the Department of Internal Revenue were Rosemary Pintard-Bowe, Acting Comptroller for the Department of Inland Revenue (second from left); Chester Cooper, Principal of Eight Mile Rock High (second from right) and Ms. Patricia Ennis, D’Asia’s literary coach (left).  (BIS Photo/Lisa Davis)